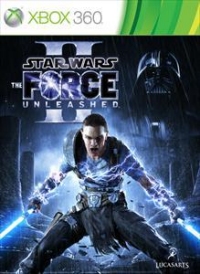 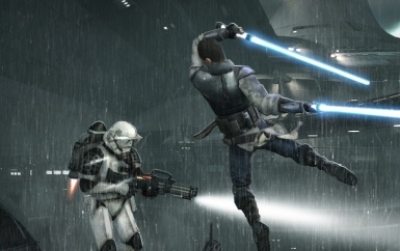 The Force Unleashed II 360 buckles under the pressure. A few bright spots of imaginative spectacle fail to make up for the criminally short story, underdeveloped characters and low expectations of the player.

The Force Unleashed was a dark story. After butchering a fugitive Jedi in front of his son, Darth Vader adopts the orphan as his own apprentice. Named Starkiller, the child is systematically abused for years, before being betrayed, murdered and brought back to life by his master. Starkiller becomes embroiled in a conspiracy that has important consequences in the greater Star Wars Legacy.

The game was considered "part of the official Star Wars canon." As a Star Wars fan, this was hugely exciting. Not only did the game reveal a little more about Darth Vader, and the time-line gap between the two trilogies, but it was official, and sanctioned by George Lucas himself.

Of course, Star Wars isn't actually real, so it shouldn't really matter if an Expanded Universe story is "official" or not, but it somehow did. It added some weight to the already impressive narrative, and by the end I felt as though I wanted to spend more time with the characters.

Inevitably, The Force Unleashed II followed. Unfortunately, something went wrong along the way. Where the original was character-driven and complex, the sequel was brief and un-ambitious.

One of the original movie trilogy's great strengths was, and still is, its believability. Humans, aliens and droids alike come to life effortlessly, and their galaxy feels lived in and real. The prequel trilogy lost some of this, partly due to the more mythological nature of the storyline. While the original trilogy is populated by fun, adventurous characters, the prequels are largely made up of epic and tragic characters. The high level of computer generated content doesn't help either.

The Force Unleashed sat somewhere between the two extremes. Starkiller and his story arc was the stuff of legend, but his strange friendship with Proxy, his romance with Juno and his relationship with mentor Kota were personal enough for me to empathise with.

The Force Unleashed II had a lot to put right and much to expand on.

His rapidly advancing abilities similarly had no place in either trilogy of movies: with enough power to defeat a legion of Stormtroopers in seconds, or even to pull a Star Destroyer out of orbit, he perhaps even eclipsed Yoda.

The Force Unleashed II had a lot to put right and much to expand on. Rather than addressing these issues though, the game simply tries to scale up the spectacle in an effort to distract from what is really lacking.

In one cut scene Starkiller wrestles with a titanic monster whilst plummeting to the ground. In another, a space cruiser is used as a battering ram to break through a city-wide shield. Unfortunately, these highlights are too few and far between: most of the so-called entertainment comes from the increasingly outrageous powers and the speed with which they kill Stormtroopers. I'd be lying if I said I had no fun whatsoever using the strong force system, but it gets old very fast.

Anyone with a love of these films will soon find it a bit much to stomach.

What makes it worse this time round is that there's no real story to pick up the pieces. Where the original game made similar mistakes, the absurdly powered Starkiller retained his humanity through the cut scenes. Here however, I found little to no character development, and certainly no compelling plot to draw my attention.

Star Wars is an old-fashioned quest story, populated by fun and relatable characters, The Force Unleashed II simply fails to provide much of that. This could be overlooked in games about lesser films, but when it comes to Star Wars the stakes are rightly much higher.

While more juvenile players may enjoy the outlandish gameplay and characters, anyone with a love of film (and these films in particular) will soon find it a bit much to stomach.

You can support Tom by buying The Force Unleashed II