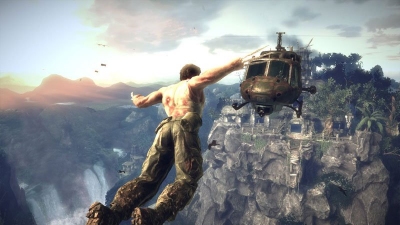 While far from perfect, X-Men Origins: Wolverine breaks preconception about movie tie-in videogames. Enjoyable combat and gruesome violence pay homage to the comic-book character, and not just the teen friendly movie version although it is ultimately let down by being too long, with overly repetitive enemies.

X-Men Origins: Wolverine is far better than it has any right to be. I found the movie to be OK: enjoyable, but not in the same league as other superhero movies such as X2 or The Dark Knight. I was delighted when I realised, a little way through, that this Uncaged Edition of Wolverine owes more to various comic-book iterations than Hugh Jackman's interpretation. While I love Jackman's Wolverine, he's necessarily de-clawed because of the nature of the movies and their teen audience.

This Wolverine is truly an animal. Enemies are torn apart in a multitude of excessive ways during the fun combat. It's a simple light attack / heavy attack / grab system, but there's an enormous number of animations that make the combat an absolute joy to watch (at the beginning of the game, at least.) Wolverine certainly earns its 18 certificate: parents should not let their kids anywhere near this game, no matter how much they love their superhero.

Throughout the X-Men movies, I found myself disappointed that Wolverine was unable to truly let loose. The game is very much aimed at fans such as myself, who enjoy the comics as much as, if not more than, the movies. It's clear that the developers are fans of Wolverine, too: the game is littered with trivia and, best of all, unlockable costumes for use in the campaign, including the classic yellow and blue Lycra.

It transplants the narrative from the film universe into the comic universe.

The storyline has similarly been altered to reflect the comics. There are a number of ways for tie-in games to approach their source material's storyline: direct adaptation, prequel or loose retelling. I liked the approach here, which transplants the narrative from the film universe into the comic universe, incorporating several elements from the Marvel Comics such as the Sentinels: 100 foot tall Mutant hunting robots.

This sequence barely made up two minutes of the movie, but here makes up at least half of the game. It was these sections that I found let the game down. There are a number of puzzles which mostly broke up the action well, but didn't really serve a purpose beyond that. The amount of combat also drew attention to the limited selection of enemies: when broken down, there's only half a dozen different enemies, and once you find the best way to take them down, it's just a matter of rinsing and repeating.

It's clearly been made by like-minded fans.

I felt as though the Africa missions served little purpose other than to bulk out the game. It's understandable, as most movie tie-ins are heavily criticised for being too short. Wolverine however, is most definitely too long, and what I found fun and refreshing near the beginning I quickly began to find tiresome.

By paying homage to the comic-book character, I found that X-Men Origins: Wolverine managed to avoid many of the pitfalls that plague movie tie-ins. It's clearly been made by like-minded fans, so it's unfortunate that the game is just too long, because in short bursts it's enormous fun.

You can support Tom by buying X-Men Origins: Wolverine