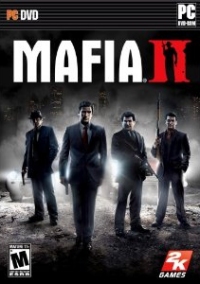 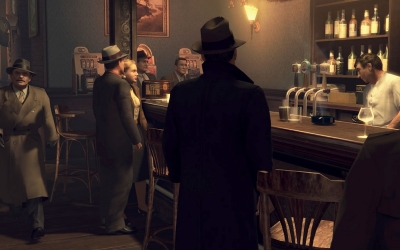 Mafia 2 is a sprawling epic: a tale of betrayal, revenge, the American Dream, friendship and family. The game plays a little like an interactive movie, taking cues from The Godfather and Goodfellas, but never reaches the same heights due to its hotchpotch of gameplay.

The tale centres on Vito Scaletta and Joe Barbaro. Vito is the son of Sicillian immigrants: his father was a dockworker and an alcoholic. After he passes away, he leaves his family nothing but debt. Determined not to suffer the same fate, Vito sets out to make something of himself - to accumulate some wealth, a comfortable place to live, and a nice car. It is, in essence, the American Dream. But in a time of poverty, there seems to be only one way to get there: organised crime.

Mafia 2 has an unusual structure, rather than a linear progression it jumps between several elements of Vito and Joe's rise to prominence across a span of ten years. This kind of storytelling is usually reserved for biopics or character studies in the cinema - and particularly gangster movies.

I enjoyed the structure of the narrative in Mafia 2. We get to see the growth of several characters, as well as changes to the City which reflect progress of the times. While it's very derivative of gangster movies, it provides the game with an unusual pace which I appreciated.

Perhaps because of these decisions - to keep things limited and focus - the game never once buckled under its own weight.

Various secondary characters are woven in and out of the plot, all of whom eventually play an important role. The story may borrow virtually every idea, but I found it hugely involving thanks to the quality of the production and the sense of place in Empire Bay.

A major theme is Vito's need to make something of himself. I liked one sequence where he gets an honest job at the docks at the request of his mother, and he's tasked with moving crates around. This is the place Vito's father worked, and although it's utterly tedious, it conjured a real sense of humble beginnings.

Upon leaving, Vito is recognised and offered work that pays "real" money, and the lure of organised crime becomes a little more understandable. I was reminded repeatedly of Scarface, and Tony Montana's desire to become someone.

The use of Vito's family as a moral compass was also something I recognised from various Mafia movies. His sister, Frankie, worries about what he's getting up to. Unfortunately, she barely features in the game at all, and I felt that she could have been used more often to demonstrate the cost of Vito's occupational choice.

The biggest problem with Mafia 2 is its two opposing gameplay styles. While the game is relentlessly linear, and loaded with non-interactive cut scenes, it's billed as an open-world game, where the City of Empire Bay (a fictionalised New York) can be thoroughly explored.

While the City is huge and beautifully rendered, there's little incentive to explore -- there's simply not that much to discover. I would have appreciated the possibility of at least having the choice to run a few optional jobs on the side.

As an interactive story I found myself thoroughly immersed.

Instead, I spent most of my time driving from mission to mission: at times, this was fine, as it increased the immersion and sense of place within the City. At other times it was frustrating, especially when pedestrian or motorist AI did something incredibly silly and reminded me I was playing a game.

As Mafia 2 draws to a conclusion it poignantly draws together its varied themes, rather than neatly tying off loose plot threads. Vito sets out to be someone, and as the game ends he's one of the most important people in the Mafia. However, he's now not sure this is really what he wants.

Mafia 2 had a few problems in terms of technical game play. As an interactive story, however, it's an epic tale that I found myself thoroughly immersed in. It borrows too many elements from superior Mafia movies to truly stand on its own merits, such as character archetypes and plot threads, but the quality of the visual and audio production, and the sense of place I felt driving around Empire Bay alleviated this more than enough.

You can support Tom by buying Mafia 2