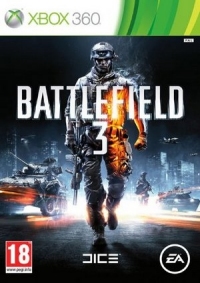 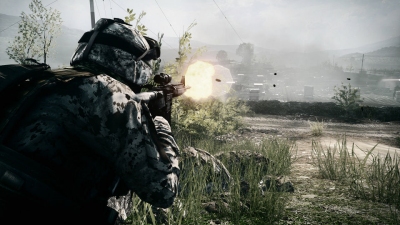 Battlefield has always been a game to enjoy with other people -- as in humans rather than artificial opponents. This year more than ever though, it has made a concerted effort to chip into Modern Warfare's single player experience -- and the sales figures that go with it.

Battlefield 3 PS3/360 easily mirrors Modern Warfare’s single player antics with a campaign that is as bombastic, knife edge, globetrotting and generally implausible as anything that Infinity Ward have come up with to date.

You flip-flop between roles as the story is told in retrospective flashbacks. By turns you find yourself, Sam Beckett like, as a tank driver, aircraft gunner, disgraced marine and even a Spetsnaz agent. What unfolds is a tale of politically fuelled insurgency that takes you to Paris, Tehran and New York. It's jaw dropping stuff, and as impressive as any other first person shooter campaign.

As we are edging towards the thin end of the current crop of consoles I thought I had seen everything that could be squeezed out of them. Battlefield 3 PS3/360 however managed to find more than a few more drops of horsepower. This is hugely impressive stuff. Both the scale and the detail combine to create an experience that had the hairs on my neck stand to attention.

Most of the time this all holds together well but, for gamers like me with a multiplayer bent, the super-strict scripting that enables these visual pyrotechnics can be a heavy price to pay. Unlike the free flowing gameplay that Battlefield's multiplayer has made its name for, here in the campaign you can only take one step at a time as the show reel slowly works through its predetermined stages.

This can mean that you have to wait for a particular scene to play out before you can open a door or proceed down a corridor. Of course this is all part of directing the drama, but still it feels costly in terms of the gameplay. I'm still not convinced that I'm happy for my games to ape Hollywood so closely, certainly not if gameplay is the loser.

I have forgotten the majority of my multiplayer sensibilities and am enjoying the ride.

Having said all this, by the time I'm a few hours in I have forgotten the majority of my multiplayer sensibilities and am enjoying the ride. The energy and sheer variety on offer carry Battlefield 3's campaign past any awkward interactive moments.

Switching to the co-op campaign I was back in more familiar territory. Or at least I thought so until I realised just how hard this was. You will need all your co-operative wits about you if you are to proceed in what must be some of the most testing videogame moments I've played in a long time.

The real meat for me was of course in the proper multiplayer modes though, and here Battlefield 3 is the same enjoyable friend it has been to gamers young and old. In stark contrast to the single player, the multiplayer game encourages diverse strategies and play styles. You really can develop your own play style as you encounter each of the maps.

While the consoles can't quite keep pace with the PC here, offering just 24 rather than 64 player maps, this is still more than enough action for me. Each battle feels genuinely epic and involves more than simply pinning down enemies or finding the best choke points. Jeeps, tanks and helicopters and jets all join the fray as the various conflicts swell in their impressive ambition of recreating a real world sense of scale and chaos.

Really underlines how successful Battlefield has been in the multiplayer world

Spending time with this really underlines how successful Battlefield has been in the multiplayer world, and how unmatched this is by other titles like Modern Warfare, Call of Duty or Medal of Honour. It's a shame that retail success of singleplayer campaigns has distracted DICE away from really innovating here. Sure, they've delivered a very impressive single player game this time around -- and matched what we've seen so far from Modern Warfare - but just think how much better the multiplayer could have been that investment sent its way.

Don't get me wrong Battlefield 3 is a very special game; it's just one that now feels a little more derivative than it has in the past. I'm really enjoying this year's incarnation, but in the back of my mind is the knowledge that it’s lost a bit of what made it so distinctive.

You can support Sid by buying Battlefield 3