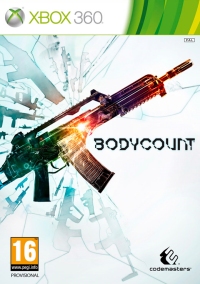 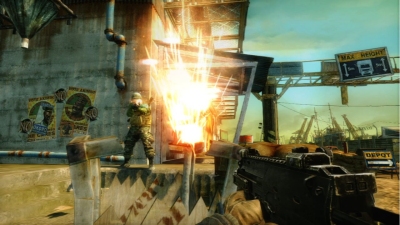 Bodycount 360, as its name suggests, plays fast and loose with human life. More than that though, the people in the game are almost incidental to the love and attention lavished on the weaponry.

You play as an operative of the Network a Government services agency with a difference. Rather than assisting in pothole filling or garbage collection, Network help neutralise violent wars (in this case it's in Africa), and uncover the forces behind it.

Some will take this story seriously and find themselves straining to put the pieces together to justify the barbarism. Other will see it for what it is, a celebration of firepower and weaponry -- much like that found in the Xbox and PlayStation 2 game Black. Whether this is a problem, depends on whether you mind shooting (a lot of) people in a videogame. For hardcore gamers this is, of course, commonplace.

It is the arsenal that steals the show, enemies, comrades and scenery all fall foul to flying metal. There's no hiding behind doors or bushes here because you can pretty much blast your way through everything -- given the right weapon.

This approach is learnt in the single player but extends into the multiplayer, and (my favourite) two-player survival mode. Although these modes are standard in any first person shooter -- here they feel fresh and oddly different.

The gun-modelling feels like it has been re-created from the ground up.

Much of this stems from the gun-modelling, which (again like Black) feels like it has been re-created from the ground up. Unlike the loose auto-aim dependant approach of other games, Bodycount has a more demanding aiming system.

As you target your enemy your movement controls switch from running to leaning. This creates the feel of having raised your firearm and locking your stance ready to land the fatal shot. It sounds like sniping, and that is a good comparison although the experience here extends to firing all weapons.

It took me a good while, and plenty of cursing, to really acclimatise to this. But once I had it felt worth it. Because of the slower more accuracy focused shooting the game proceeds along much more tactical lines than I am used to -- and I respected it for that.

Take this into my (favoured) multiplayer modes and Bodycount again feels very much like its own game. Rather than the frantic rush of other FPS's like Battlefield or (perhaps more so) Modern Warfare, here the gameplay takes a more staccato turn. Strategy and planning become more important because once you are in a firefight there is no backing out.

The freshness of the gunplay wasn't always to the good. There are times when the system feels like it needs a bit more refinement. This is painfully evident with the grenade throwing. I simply couldn't get my tactical blasts to land anywhere near where I wanted them, in the end abandoning them in favour of more ballistic weapons.

Its best is seen in the campaign where you use the weapons wisely.

Other innovations in Bodycount are also a little off. There is a score-attack approach to points where you get bonuses for chaining kills together. It's a nice idea, but not one that fights against the pacing of the enemy onslaught that often demanded quick reactions rather than a measure response.

Being someone who enjoys multiplayer more than single player campaigns meant that Bodycount was more a game I appreciated than relished. Its best is seen in the campaign where you find yourself taking time to use the weapons wisely and working towards those kill-chain bonuses with care.

When this mixes with the chaos introduced by human players in the death matches much of the uniqueness is lost. There is still plenty of multiplayer fun to be had, but if that is all you want the game for there are better examples.

You can support Sid by buying Bodycount