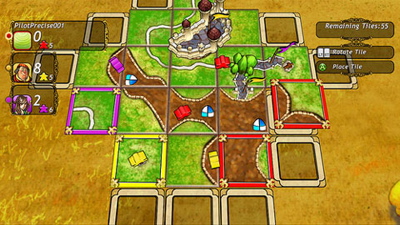 Carcassonne's rules are simple: two to four players take it in turns to upturn a tile and then place it on the board. Each tile has specific parts, roads, castle walls, junctions, cloisters and fields, with a score allocated for each. To get those points, a player must do two things. First he must complete his road, castle or cloister, and second he must have a follower based in or on his construction, but you can only add those followers immediately after you place a tile. And just to make things a bit more interesting, placing a follower in a field will score you no points till the end, when he rakes them in as a farmer supplying all the castles his field borders.

I was going to say a lot of things about Carcassonne. I was going to have a little laugh at board games in general and say something about how they belonged to another time, somewhere between post-war Britain and the pre-videogame age. I had planned to heap scorn on the videogame version of Monopoly, a game I hadn't actually played in pixel form but one that I've loathed through the decades. Then I started to play and discovered I had plenty more to say about Carcassonne. A more prepared writer would have scribbled all these thoughts down somewhere safe. And I might well have done except I kept needing to have one more go.

It's not at all true that Carcasonne's challenge to your grey matter is on a level with chess's, but it's fair to say that it's in the same arena.

Five days later, and all the things I had planned to say have become a jumble of unfinished musings. I'm finding it hard to finish these sentences because the lure of playing yet another Carcassonne game is strong. I can't quite believe that a board game is fighting off all the traditional videogame competition, but that's exactly what is happening. All the gun shooting, goal scoring, level upping games have gone back in their cases and are looking a bit sheepish up on the shelves.

It's not at all true that Carcasonne's challenge to your grey matter is on a level with chess's, but it's fair to say that it's in the same arena. When the first tile is placed on the board it's simple enough to keep up with what's happening, but as play evolves you need to keep an eye on every corner of the map and everywhere else between. The same thoughts run through my head playing Carcassonne as do over a chess board: if he goes there then I can go there, but if I do this then he won't be able to do that, or if I do this and hope he does that then I can do the other. And all this is crammed into forty-five second snippets. That's all you have to decide where on the board your tile will fit to benefit you most. A tile you haven't seen until the clock started ticking. I can throw a month's worth of concentration into one game of Carcassonne and think it hard thought well spent.

Which must mean my concentration's not worth the brain it's cooked in because to date, my win lose ratio is 10-33. But then, there's got to be something great about a game I am constantly losing if I'd rather be playing it than anything else. And when I do win, I am ecstatic Đ moved enough on one occasion to punch the air in triumph and then stand, arms wide apart, staring at my wife like she's the home end at Stamford Bridge and I'm Didier Drogba, hat-trick hero.

I can throw a month's worth of concentration into one game of Carcassonne and think it hard thought well spent.

It's often said by gamers that to be a better player online, whatever the game you're playing, you need to play the best. That's a load of rubbish. Playing Modern Warfare 2 against the leaderboard's top ten for an evening isn't going to make you a better player, it's going to make you cross. But with Carcassonne there is some truth in it. It's only when you see the kind of tactics employed by opponents better than you, specific tactics for specific tiles even, that you begin to see the potential of each piece.

That's why, when I stop to consider whether it's the board game I'm playing or the videogame version that's got me so hooked, the videogame comes out on top. I could buy the board game and have it sit in a cupboard for months at a time until I could convince a rare guest that they want to play me, or I could stick with the videogame and have access to hundreds of opponents every night of the week. I won't even mention the anal desire to see all the tiles fitting precision neat next to each other. Best to leave that thought in the jumble.

The fist pumping rush of winning a game you're losing right up to the very end when your cunning farmer deployment mops up all the extra points available.

An excellent game to dip into for half hour sessions or spend all evening with. It's a shame there aren't that many players online because it's nigh impossible to get a game with three or more players. But if you're the kind of person who loves mental agility more than thumb skills, this one's for you.

You can support Sid by buying Carcassonne