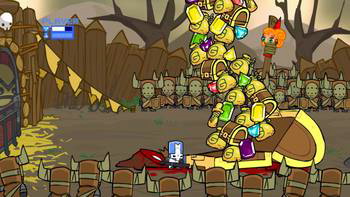 Castle Crashers DLC King Pack introduces two new playable characters and a couple of new pet pods to collect, but even though these two extras make no discernible difference to the game. I still had a great experience playing. Donning my multiplayer headset and mic, I waded in with eyes and ears wide open.

There are multiplayer games that make you wonder why you bother to put your headphones on - the kind of games where the only way to communicate seems to be through continuous verbal abuse. And then there are games that reaffirm your belief that the online community isn't populated entirely by testosterone-fuelled teenagers with anger management issues.

I jumped into a game with the sole intention of trying out the King character, just to see what new stuff he brought to the game, but the very first game I landed in diverted my attention completely. There were only two of us, myself and a Dutch fellow, and before I could say hello he asked me if I could help him get the last of the twelve achievements available. "Of course", I said, but I had to point out that I was a new player to the game and couldn't be sure I'd be that helpful. Okay, he said, I'll help you first then you help me.

Over the course of an hour and a half my new online friend took me to all manner of areas on the map, digging up secret weapons, finding pet pods for me.

So off we went. First, he kindly helped me to get the exact achievement he was after: Conscientious Objector, where you have to play through the whole of the barbarian area without attacking once. Which was pretty easy for the both of us. All I had to do was stay out of the way while his level 46 character laid waste to the enemies. Once that was done, I expected us to play it again for his own benefit and then it would all be over, but over the course of an hour and a half my new online friend took me to all manner of areas on the map, digging up secret weapons, finding pet pods for me, letting me grab all the money and food, and explaining the various tactics needed for each zone.

I levelled up five times during the course of play and discovered a variety of secret areas I would never have found on my own. What's more, I had a blast. I'd not paid too much attention to the pets - flying, pod-shaped animals that assist you in a number of ways - but my online buddy explained which ones were the best for me to level up faster, have a stronger character and collect more money (I'm a bit of a greedy gold digger, see). We whizzed through tons of areas, even playing the final, crazy battle, with me running away a lot and him doing all the hard work. But even then, he was giving me advice on how to deal with the big bad wizard for when I came back to play alone.

Once finished, we parted with lots of thanks and I felt a warm glow in my soul.

For an hour and a half he helped me secure more experience points, more pets and more weapons than I actually needed until there were no pets left for me to collect and no more secret weapons to be found. And only then, after I had offered and re-offered, did we return to the barbarian area to get him the last achievement. All that levelling up and weapon gathering meant that I whizzed through with consummate ease as he sat back and avoided contact with the enemy.

Once finished, we parted with lots of thanks and I felt a warm glow in my soul. The world is full of kind, helpful gamers who have no ill will to their cousins. Five minutes later, when I came back for some more, that glowing feeling was smothered when I joined a game with a couple of 256 level players, who took me and another lowly level 17 player into the battle arena, wiped us both out in the first few seconds and then had such a long, drawn-out one-on-one that I got extremely bored and had to leave. But not before I heard a teenager call a pre-pubescent boy the kind of name you will never see printed here. Some things never change.

Being able to play with someone from another country entirely and being made to feel like I was part of an international community of like-mined gamers who were only too happy to lend a hand to a time-strapped gamer who foolishly cares about his achievement score.

I'm not entirely sure that this expansion pack is worth getting since new characters and pets don't really make much difference to the game. If you're as short on time as I am, the original selection of characters and pets is more than enough to keep you occupied. But if you do download this game, be sure to grab the free theme pack as well - it makes a nice change to the regulation Xbox Dashboard.

You can support Sid by buying Castle Crashers King Pack