Other GamePeople columnists have reviewed this from their perspective - huh?:
Story Gamer (360)
Frugal Gamer (360) 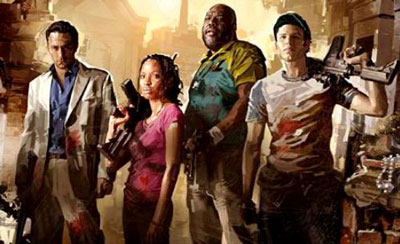 Left 4 Dead works exclusively as a multiplayer game. But unlike other team based games, it's flexibility rather preparation that makes the difference here. Because of that, this is an entirely unique multiplayer experience.

Left 4 Dead's zombies, despite their tendency to consume the flesh of the living, aren't terrible people. They aren't particularly rude, they're unlikely to bitch about their best friends behind their backs, and they don't screw over teammates purely for the sake of achievements. I'm willing to bet that the virtues of the undead are considerably greater than those of the living. Flesh eating aside, of course.

With an empty house and an abandoned barn at our disposal, our multiplayer tactical opportunities - although not terribly exciting - weren't too limited. Molotov's, pipe bombs, shotguns, sniper rifles - we had it all. But despite these advantages, we were ill-prepared for Blood Harvest's finale. This was Left 4 Dead's endgame, and this was our final escape. Our plan, to sit in a wardrobe and wait-out the apocalypse.

With this in mind, my friends and I had developed a 'no way in for them' strategy. But little did we consider that this also meant a 'no way out for us' scenario. We succumbed to the zombie horde within a matter of minutes. This was the first of many, many failures. We soon realized that we were being outwitted by the undead.

Valve's zomb-pocalapyse requires the antithesis of multiplayer planning - rather, the ability to react on the fly. It could be any combination of 'special' zombies, the amount of resources at hand, or the distance to the nearest safe house. The ability to manage these three factors ultimately determined whether or not we would out-live our cannibalistic counter-parts.

The most important was our ability to handle the 'specials' - extra-ordinary zombies, each with a specialisation. If we weren't being trapped by a Smoker's tongue, we were being mauled by a Hunter, or spat on by a Boomer. Whilst the first two were solely aimed at isolating and a particular player, the third acted as a 'they're over here!' for the zombie populous.

But the combined threat of the other specials could not surpass the raw rage and ferocity of the 'Tank'. This was a foe possessing the strength, size, and durability of its namesake, which could, and usually would, bulldoze the best-laid plans. So, after the first half-a-dozen attempts or so, we stopped making plans. That's not to say it doesn't require preparation, though. If anything, hours of play had taught us to 'harvest' resources. After we had arrived at a new location, we immediately thought, 'Where do the med packs spawn?' because even if we didn't need them then, we would certainly need them later.

We deemed two members of the team 'Tank-killers', equipped with automatic shotguns and just two Molotov's, their task was to take down the Tank as fast as humanly possible. But when the most inexperienced of the group slipped from the relative safety of the Barn's upper-floor, the situation began to deteriorate. In a reckless rescue attempt one member was immediately dispatched by a Smoker - the guy who was standing next to me just seconds ago was now the guy being harassed by an oversized tongue and a fraternity of freaks. Another was quickly victimized by a now rampaging Tank. And the other, recognizing that an occupied Tank was about as threatening as an irate squirrel, decided to watch the action from the safety of the barn in all its disastrous beauty.

Seconds later our means of escape arrived, and not only did we abandon the better, more competent part of the team, we also abandoned that once-sacred pact. Two of us screwed over friends we'd known for years (of whom one was still being brutalised as 'Achievement Unlocked' appeared on our screens) purely for the sake of a bigger gamer score and a slightly inflated sense of self-importance.

Sitting at home in front of the TV and playing Castle Crashers on a console feels like I'm neglecting my other games.

Setting out so hopeful and committed to our group, meeting a challenge more complex and unrelenting than we had imagined, and finally bailing on both teammates and mission to save our skins. This is what makes each game unique and intriguing and such a ride.

Left 4 Dead offers multiplayer pleasures unlike any other game. The variety of foes, and their intelligent use of tactics make this the game for the quick witted rather than strong willed. The AI is directed to reward creative play, and throttle the challenge to encourage even the post trigger happy of teams to tread carefully.


You can support Sid by buying Left 4 Dead