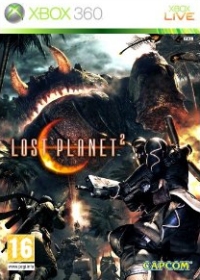 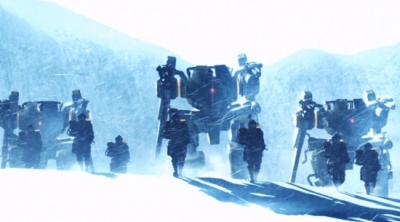 Lost Planet 2 is far from perfect, but it aims high and delivers a multiplayer experience that is rare these days. Anyone with three friends to play through this with should forgive any shortcomings and jump right in.

Capcom have put a lot of work into the sequel to Lost Planet, so much so that it's almost an entirely different game. Lost Planet 2 offers impressive four-player online co-op, strong multiplayer, countless unlockables, super-stellar visuals and plenty of pizzazz.

At times these pieces come together and really sing, but strangely they are also often a little miss matched. When it relaxes into its third-person sci-fi shooter genre it feels confident and awe inspiring. But when it takes itself a little too seriously, and tries a bit too hard the fun drops away.

But for me, the questionable level design and mediocre Artificial Intelligence were easily fixed - just add a few friends. On multiplayer terms Lost Planet 2 is so much more fun, and much more of a success.

We were constantly exclaiming to each other about each new environment we entered. Lost Planet 2 puts in huge effort to both impress and ground the experience and a world that is as unexpectedly varied as anything else we had played.

You'll visit stark sparse areas like the original's snow planes, red lit industrial corridors, turbulent seas and desert plains. You'll jump on a throbbing speeder; float in space; and defeat a giant spider from within. Tundra rich shootouts, industrial battles and ghostly boss fights are easily a match for the spaces created by Halo, Modern Warfare and the like.

Some may find the missions feel a little random and bumpy. Admittedly there isn't very much to tie them together and they vary hugely in difficulty and length. But play them multiplayer, with some real life comrades and this just adds the quick show down fun.

Often tasks can be split amongst your team as you struggle to bring down a big boss.

The missions play to this co-op approach as well. Often tasks can be split amongst your team as you struggle to bring down a big boss. Whereas on you own your AI partners are, how shall we put it, a little lack lustre on the assistance side, playing multiplayer with real people creates real tension.

Not only are you trying to stay alive for you own benefit, but you need to succeed so that your team mates can progress their parts of the mission. And with a full complement of players (2 locally and 4 online) the game takes on an epic scale - and touches moments of Halo's glorious legend.

I'd have liked to see a little more flexibility here though. One friend, late for our evening's play, found they had to wait until we stopped playing our mission to join in. No drop-in, drop-out play. But what made it trickier is that you can't jump into a game further on that you have progressed on your own.

Playing through together though, multiplayer style, again this didn't really matter. We set out from the start as a team and played through the experience until we had wrung every last battle from it and finished, panting and awe inspired at what had just transpired.

Moving on from the cooperative to the competitive multiplayer again made our multiplayer ears prick up. There are a slew of impressive modes here, along with a great rewards system that kept us playing for hours.

Many of these multiplayer modes are seen elsewhere: Elimination, Team Elimination, Capture the Flag and Conquest. Fugitive mode returned from Lost Planet 1 and again pits a team of lightly armed forces against fully equipped team of hunters. We loved playing this heavily weighted challenge.

Such is the scale and enjoyment of a four man co-op play through that for me it is a real gem.

As you play these levels you earn points, which can be spent on winning new weapons, equipment upgrades as well as new character customizations. We spent far too long customizing our weapons and appearance, and each of us soon had a favourite configuration.

Although many will deride some of the single player shortcomings of Lost Planet 2, such is the scale and enjoyment of a four man co-op play through that for me it is a real gem. Sure, it walks its own path and seems to turn its back on more recent developments in video gaming. But in multiplayer game play terms this is a game that offers something special.


You can support Sid by buying Lost Planet 2