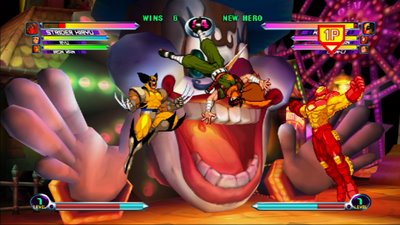 Marvel Vs Capcom 2's multiplayer games on Xbox Live are dominated by the same expert players that ruled the arcade brawlers ten years ago.

It seems odd that a game that looks and plays like this pixelated cartoon fighter is only ten years old when you discover that the original Tekken, a graphically superior and visually smoother game, was released into the arcades in 1994. Yet Marvel Vs Capcom 2's frantic button bashing still has plenty to offer hardcore fight fans. Online there's no room for complacency - unless you know exactly what you're doing you're going to lose.

I, of course, have no idea what I'm doing. Perhaps if I'd ever been a fan of Street Fighter I might have a chance of winning some fights, but I was more of a Mortal Kombat man. Which is like saying you preferred Sonic to Mario when looking for an excuse for dying on the first level of Super Mario Galaxy.

Knowing I have to play this game online is a bit like waking up and realising you've got Double French first lesson.

Knowing I have to play this game online is a bit like waking up and realising you've got Double French first lesson. And the only French you've ever been able to retain is "j'voudrais une pomme de terre". If you could get through a French exam by simply bashing the buttons on a console bat for fifteen minutes, I'd no doubt achieve a grade C. If I could get through one single game of Marvel Vs Capcom 2 online in the same manner I might not lose within the first minute. I might actually get more than a couple of hits in too.

There are two sado-masochistic options: ranked match or player match. Ranked match seemed like a definite no-no. Taking on people who are trying to improve their league table positions is too much like Rushden and Diamonds meeting Manchester United in the first round of the FA Cup - a bridge and a half too far. So I settle on player match. Player match does something I've not seen before online. Instead of finding someone waiting to play and chucking you straight in, it finds a game already being played and leaves you in the queue for a winner stays on tournament. And while you're waiting in that queue you can spectate the fight in process.

It's a bit like being in the arcades, standing as close as possible to whoever's playing, leaning in from the side, trying to put them of so they can walk away and leave you the cabinet all to yourself. Except you're watching over the shoulder of an expert who, once he's finished wiping the floor with his current opponent, is going to give it a thorough polish with you.

A small part of me wants to play again, but it's so very small and dwarfed by the part of me that says leave now and never return that I ignore it.

The game is so impossibly fast that I can't actually tell what's happening. All I know is that my character is perpetually falling to the ground and my enemy's character is employing one of several different pain inflicting techniques on my in limbo fighter. One minute later, it's all over and I'm back in the queue, waiting for more punishment.

A small part of me wants to play again, but it's so very small and dwarfed by the part of me that says leave now and never return that I ignore it. Instead, I hatch a plan. My wife was once a bit of a fighting game fan, utilising the button bashing technique successfully back in the day to wipe out my favourite Tekken character, Yoshimitsu, with her favourite, Ling Xiaoyu. I tell her that I need her to play me at Marvel Vs Capcom 2 so I can finish this review. I remind her of the day she thrashed me down the fun fair at Street Fighter, back when we were dating, and suggest that her marvellous button bashing skills will probably prevail. Five fights later, five wins for me, and I'm feeling a lot better about myself. My wife's given up, citing aching thumbs, and the telly's back on, but at least I can finish this review and make out I'm not as bad at this game as I really am.

Getting excited about playing as X-Men characters. Or maybe being reminded of childhood days when loitering around an arcade cabinet while someone else is playing it, hoping your presence is enough to put them off and make them leave was best. Losing repeatedly was definitely not a highlight.

With over 50 characters to chose from, three at a time, and a seemingly endless supply of experts waiting to play you online, this game is only for the hardcore fight fans who have enough time to commit to learning all the moves. But as fighting games go, there are so many more worth your time and money out there.

You can support Sid by buying Marvel Vs. Capcom 2