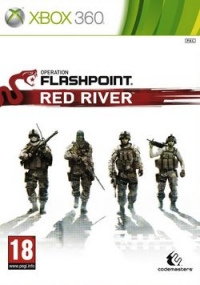 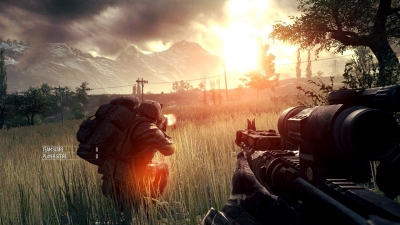 Operation Flashpoint Red River thinks it needs to be Battlefield or Call of Duty, when in fact we love it for being itself. When it comes to realistic and open battles, Red River happily continues the rich Operation Flashpoint tradition that although less popular is a much more engaging war game.

Before someone has a great idea it's impossible to imagine what they might come up with, but once invented it's hard to remember living without it.

In 2001 the original Operation Flashpoint created a new realistic approach to first person war games. Of course now we have Call of Duty, Medal of Honour and Modern Warfare, but back then it was a real revolution.

Like many new inventions though it didn't sell as well as it might. To rectify this, a follow up in 2009, Dragon Rising, revisited the realistic battles of the original. But apart from die hard fans, Operation Flashpoint still hasn't really had its day in the sun.

Red River aims to set this straight and it starts by injecting a brash, some would say outlandish, storyline into its previously understated meanderings. It's the familiar mix of U.S. Marines, civil war and various small countries. But more than the events you play through it's the tone that is most striking, and perhaps out of place -- epitomised in the sweary sergeant Knox.

That sounds negative but in actual fact it's rather exciting.

However authentic the casual racism and homophobia are in these scenarios, there is simply too much entertainment threading through these rants for them to really be more than the broadest of brush strokes.

Beyond this however, the game is largely similar to previous outings. Now, that sounds negative but in actual fact it's rather exciting. If like me, you appreciate the finer points of the world that Codemasters have created with these games you'll know that it is quite a rare experience.

For a start, rather than a range of superhuman individuals, the personnel respond appropriately to the bullets and shrapnel -- they fall like flies. This combines with large open battlefields, that shun both funnelling and signposting of the more mainstream titles, to offer an experience that is both difficult and believable.

Through this theatre you control a tight knit team. Orders and instructions are selected via the now familiar radial menus accessed with the D-pad. Each item is there for a particular purpose and needs to be used accurately if you are to progress.

Four main approaches are offered - manoeuvre, follow, suppression, and tactics. At first these words seem odd and imposing, but you'll soon appreciate the wisdom of this grammar and move smoothly through each mission.

It gave us a chance to pick to hone our skills at a particular character class and role.

The single player campaign will capture the minds of many players looking for their next Operation Flashpoint fix, but for me it was the appetiser to the main event that is the four-player co-operative play. I guess you may have seen that coming if you read my column regularly.

Even without a competitive multiplayer option, I still found more than enough value playing with three friends through the story. Not only did this circumvent some of the computer controlled teammates who were more artificial than intelligent, but it gave us a chance to pick to hone our skills at a particular character class and role.

My favourite was the all rounder rifleman, and my friends were more than happy to pick scout, grenadier and rifleman. These roles felt well balance and each had their benefits and specific equipment upgrades to unlock. I know that having only four choices does sidestep some more specific (and perhaps more engaging) roles, and takes the game into Battlefield territory, but it is executed well enough for me not to mind.

At times this was magical, and it felt properly alive.

The most unusual part of all this is the sheer variety that Red River creates. By offering you a genuinely branching set of choices the resulting experience is as dependant on you and your colleagues as much as the game's pre-written battle plan. At times this was magical, and it felt properly alive.

Operation Flashpoint Red River spends a lot of time and effort trying to be something it's not. But such is the quality of the constituent parts that what survives is that realistic and compelling experience that has had people coming back to play it again and again.

You can support Sid by buying Operation Flashpoint: Red River