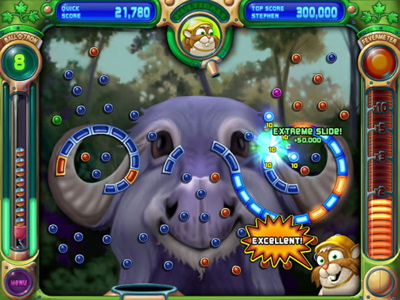 Peggle on the 360's XBLA is an enjoyable if short lived experience in solo format that becomes an addictive, compelling puzzler once you're online and multiplaying against the rest of the world.

I only set one rule for myself for these reviews: absolutely no solo play whatsoever. But the leaflet that serves as a rule book in my house has had to be torn up since Peggle arrived. It would have been no trouble at all to start playing online against others right away, but I couldn't help but have 'just one go' at the solo adventure. I only meant to have a very quick five minutes to familiarise myself with the controls, and then all of a sudden it was half an hour later and I'd completed all ten challenges laid down by all ten Peggle Masters.

It turns out that this was absolutely the right thing to do, because without beating each master's puzzles you'll be unable to select any characters to play as in the multiplayer game. And some of those characters can mean the difference between winning and losing.

The game itself is some kind of cross between Pachinko, pinball and Puzzle Bobble.

The game itself is some kind of cross between Pachinko, pinball and Puzzle Bobble. At the top of the screen you have a ball gun. Beneath that are a number of coloured pegs and tiles, a mixture of blues and oranges, and the object of the game is to hit all the orange pegs with the balls in your gun to clear that screen and move onto the next. However, there are twenty orange pegs on each screen and you only have ten balls to hand.

In essence, it's all down to physics - bounce the ball at the right angle off a chosen peg at the top of the screen in order to hit the next peg at the right angle and so on until your ball reaches the bottom of the screen. If you're lucky, or blessed with skill, your ball will land in the moving bucket at the bottom and you'll win a free ball. Free balls also come when you score over 25,000 with one shot.

There is more help at hand in the form of the power peg. A single purple peg that changes position every shot and, if struck, will multiply all subsequent peg hits three fold. But the most useful peg on the screen, and the reason why playing through the first ten solo screens is vital, is the magic green peg. Hit this peg and on your next shot you'll have yourself a very special and helpful magic shot, dependent on the character you selected to play as at the very start of the match. My personal choice is Zen Ball. With Zen Ball, all you need do is shoot at any peg on screen and it will recalculate your shot to the correct angle to score maximum points.

Yet as much fun as those initial solo games might be you'd soon tire of it without the glory of the muiltiplayer games.

It seems simple and it is simple - you'll have picked up the basics after your first two goes with consummate ease - yet as much fun as those initial solo games might be you'd soon tire of it without the glory of the muiltiplayer games. There are two multiplayer options, Duel Mode and Party Play.

In Duel Mode you play against one opponent with just one screen between you, taking it in turns to shoot. Which changes the dynamics of the game entirely. For one, if you fail to hit any orange pegs you are fined 25 percent of your score, meaning that even if you're out in front on points, one missed shot can lose the entire game for you. Also, it became clear after losing the first six matches that there are keys to success.

It is vital to get the green magic peg as early as possible. Even if it means missing an orange peg and losing all those points. Playing as Zen Master means that once you've hit the green peg, your next shot is going to be a huge one. Yet the Zen Ball doesn't guarantee a win, tactical play is what seals the deal. What you need to do is ensure that you get the last orange peg. Because once the last orange peg has been hit you move into Fever Mode, whereby five high scoring slots appear at the bottom of the screen, ranging from 10,000 points to 50,000, and all the leftover blue pegs increase in value to between 1,000 and 5,000 points. Hit the last orange peg, therefore, and you could find yourself racking up 100,000 points with one ball. 99 times out of 100, this equates to a game winning shot.

Once I'd worked that out my win lose ratio began to look very healthy indeed. So then I switched to Party Play, in which up to four players play at once, each with their own screen, in a simple battle to see who can score the most points with ten balls. Now I was expecting this to be a completely different ball game, requiring a good level of skill in order to win. With everyone playing the exact same puzzle, you'd think those with plenty of Peggle experience would wipe the floor with us novice Except the first four games I played I won. And not just by the skin of my teeth, but with a full head and shoulders out in front. I ought to have known something wasn't quite right; my gaming ego hadn't been this well massaged since I beat my neighbour's 10-year-old son at Tekken over and over. Thankfully, someone who did actually possess the requisite amount of Peggle skill came along and completely rubbished my fantasy by thrashing me and everybody else so soundly that I almost turned the game off. Almost.

But there's something else about Peggle that I've failed to mention yet. With Peggle, even though I rarely plugged my mic and headphones in, I was still congratulating opponents out loud whenever they pulled off a particularly tricky, match wining shot. And I have a feeling that it's the same for everyone. As once such opponent put it in a text message after a game: "Peggle :)". I couldn't agree more.

All of them. I can't find fault with this game, I'm still smiling about it now.

Multiplayer VerdictYou can get a fantastic gaming hit out of Peggle from a quick half hour session. It's enough fun for casual gamers to thoroughly enjoy and yet there's enough of a cerebral challenge that hardcore gamers and puzzle fanatics will love it just as much. You know it's a good game when that quick half hour suddenly turns into an all-nighter.
Written by Sid Andrews

You can support Sid by buying Peggle