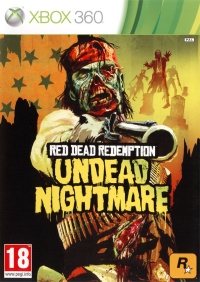 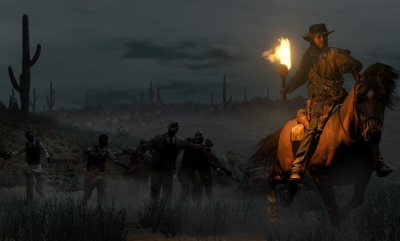 Red Dead Redemption Undead Nightmare lets us finally run amuck without worrying about the consequences. A dark twin to the original, this moonlit world creates some classic multiplayer moments. It's just a shame it doesn't have the split screen mode promised on the back of the box (pictured).

Red Dead Redemption was a game that stayed with me for a long time after playing it. In many ways I didn't want to go back and play it again for fear of treating on what had become those memories.

But although I was happy with the singleplayer, the multiplayer options never really seemed to cut it for me. The Posse mode was an interesting distraction but lacked the focus I want from these games I play with my friends.

Then came Undead Nightmare, a wonderfully tongue in cheek trip down a road to possession, gore and the ever-living. This takes Red Dead Redemption into some of my favourite multiplayer territory - that of wave attack gaming.

This is the game type that used to be stock in trade for older games like Time Splitters 2, but fell out of fashion as both split screen and bots disappeared from multiplayer option screens.

Happily there has been a resurgence though. This not only revives split-screen multiplayer but also provides a context for computer controlled bots to find a home. Left 4 Dead, Aliens vs. Predator's survivor mode, Halo ODST's Firefight mode, Gears of War's Horde mode and Call of Duty's Zombies mode all get players working together against waves of attackers.

Undead Nightmare joins this group with both a multiplayer mode that can accommodate up to 16 players online, or via system link. But before we go too far we need to correct the game box labelling.

Misleadingly the box states in green Co-op 2-4 which as Microsoft states should "specifies how many players the game supports offline, in co-op." But Undead Nightmare doesn't have a local split screen mode, the box is just wrong. It's a real shame as this disappointment may colour people's experience with the rest of the game which is excellent.

The multiplayer gameplay drops up to four players in one of the three regions of the world armed with just a handful of weapons. Then the enemies start to appear on the horizon - hundreds of plodding zombies. Some charge at you and will knock you over if you aren't careful. Some crawl on all fours making for a difficult target. Others hurl green goo at you. And all the while, the sinister narrator hangs over the action adding venom to the hectic scenes.

My first few plays are chaotic and haphazard, but I soon got the hand of things and developed some tactics. You really need to split up and co-ordinate your ordinances. Special weapons like the zombie-bait need to be used sparingly if you are going to last.

One way or another though each match comes to an end - and always with the eventual death of the players. The inevitability of the impending doom makes the desperate stands both sadder and funnier.

This dark humour (and washed out palette) is also found in the zombie single player campaign that comes on the disk. You play Marston still, but here he has a knowing glint in his eye as he delivers comedic one liners.

The single player sees your second wife and child soon fall prey to the horde and sets you on a mission to free the land from infestation. You are playing in locations that are familiar yet eerily unfamiliar in their new hues. It was nice to have a fresh reason to play more Red Dead Redemption without having to walk over my previous experiences.

It could easily have been a quick cash-in release. But it is to Rockstar's credit that Undead Nightmare feels as fleshed out (ed: nice) as the original. There is a real finesse to the experience, which they gauge perfectly.

It's a darker, more abandoned journey into a simple nightmare that is almost the opposite of the original's deft moral tightrope walking. The pair of games work well together though, like a pair of non-identical twins each similar looking but also very different.