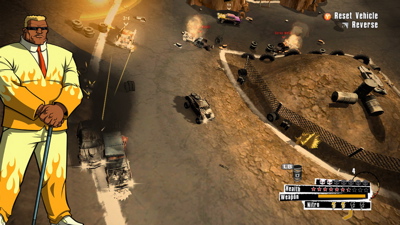 In a world of modern ultra-realistic racers, Scrap Metal harks back to the days of arcade racing mayhem. On the 360's XBLA it has a heavy emphasis on mayhem and complete disregard for reality. Memories flood back of 80s arcades, Super Sprint and Ivan Ironman Stewart's Super Off-Road.

Once upon a time visiting an arcade was one of the most exciting things a boy could do on his holidays. Now, of course, the arcades have nothing on our home entertainment systems, meaning the pleasure of spending a few hours pumping ten pence pieces into a plethora of units has been consigned to the pages of video game history. But every now and then a game pops up on the radar that brings it all back in spades.

Scrap Metal doffs its grease monkey's cap to the late 80s arcade stalwart Ivan Ironman Stewart's Super Off-Road. In that game you picked up weapons as you went and really needed to do no more than spin the steering wheel wildly to turn. Which doesn't sound like a lot of fun, but believe me, back in the day this game was up there with the best. It only cost ten pence to play and you got such a kick out of manically whipping the steering wheel about that if you weren't careful you'd squander your entire holiday's worth of spending money in the space of one visit. It was daft, it was immediate, it didn't require huge levels of skill or practice and since you could get up to four people playing at the same time, it was one of those arcade cabs that you didn't have to loiter round waiting for a go.

I'd forgotten all about it until I sat down to play Scrap Metal. Almost immediately, though, memories were stirred. In Scrap Metal's multiplayer, you dive into a game, select your vehicle dependant on what you want out of it, speed, armour or weaponry, and get stuck in. There are three types of game modes, Race, Destruction Derby free-for-all or King of the Hill.

The first game I dropped into was a straight up race against one human player and a field of AI cars. The key to winning lies in mastering the art of drift, but don't be fooled into thinking this game uses realistic physics because if real cars drove anything like this you'd be crashing into everything before you'd even put the key in the ignition.

To drive, you simply push the left analogue stick in the direction you want to go, whipping it left and right to turn, and though there is a break button, I don't think I used it once, relying on timing to slide my VW Beetle cum monster truck round the bends. Naturally, I came second from last in that first outing, but I didn't really mind, tearing round tracks, my thumb planted firmly on the fire button, machine guns blazing everything in my path, brought back those warm holiday arcade visiting memories so much I was wishing I had a steering wheel in front of me to spin like a mad man.

However, the racing element of Scrap Metal isn't the most fun part of the game, Demolition Derby and King of the Hill had me coming back for more. In Demolition Derby you're slapped into a small, trackless arena and given a couple of minutes to destroy as many opposition cars as possible. So there's no need to be a drift genius, all you need is a bit of bloodlust. Or rather oil-lust. It's winner takes all as for two minutes the screen is awash with cars and trucks ramming into each other, spitting bullets, spewing flames and zapping lasers left right and centre. To put it simply it's a bit of a giggle. In my very first match, playing against two human opponents and a heap of AI cars, I won.

To put it simply it's a bit of a giggle.

King Of The Hill, on the other hand, requires a good dose of skill. You win points by crossing check points in either first, second or third place. Being out in front for the whole race would definitely see you winning, but in the games I played, no one kept the top spot for the entire run. It seems that a combination of destroying other racers and picking up second and third place points right up till the last few laps, then wiping out the leader and grabbing the first place while he dropped back into fifth was all that was needed. There wasn't much skill involved apart from keeping the car on the track and my thumb on the fire button.

All this took perhaps half an hour, and that was long enough for one sessions for me. Like Ivan Ironman Stewart's Super Off-Road, Scrap Metal hits all the right throwaway fun buttons in that you can pick it up, play for a bit, have a good time, then turn it of and forget about it.

There isn't much depth to its multiplayer and I don't think its designers ever intended there to be. I hope they designed it with that quick, ten pence of action, arcade immediacy in mind because essentially that's what you get. For 1200 points, it seems little steep, and I do wonder if I'll ever go back and play it again. Maybe I some friends pick it up and want to play me I'll have another go, mainly for the kind of flowery banter a game like this can coax out of a group of overgrown children who should know better. But me diving in alone to play against strangers seems a little unlikely.

It's a throwaway video gaming in the sense that you can have a quick game and then go and play something else. While it's fun in short bursts, Scrap Metal is never going to vacuum up all your spare time and make you forget you have any other games, or friends, or a family or a life. The price is a bit steep but it's unadulterated fun while it's got your attention.

You can support Sid by buying Scrap Metal