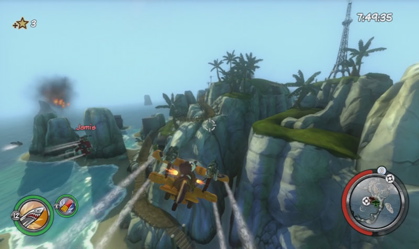 Taking the serious flight simulation distinctly out of the equation, Snoopy Flying Ace attempts to put the fun back into aerial combat with a mixture of classic and wacky multiplayer dog fights on Xbox Live Arcade.

Videogames that involve swooping through the skies in a plane are like Marmite to me. I was fully prepared to get very annoyed with Snoopy Flying Ace since usually when I am in command of a videogame plane I'm destined to fly it straight into the ground, upside down, with the engines off and the flaps down.

But with me first excursion into the flak streaked skies it looked like everything was going to the usual script - I was shot down repeatedly. The only relief came in the moments when I'd die horribly crashing into the cliffs, buildings and other planes. So much for jumping in and picking it up as I went along.

However, that's not to say that I didn't have a good time losing. Snoopy Flying Ace doesn't bother you with all those nerdy, proper flying rules that the majority of flight based games can't live without. It actually has a lot more in common with Crimson Skies and Diddy Kong Racing and you shouldn't really have much problem learning the ropes. Right stick for barrel rolls and loops, left stick for normal steering, guns on the bumpers, breaks and boost on the face buttons. And after half an hour in the solo campaign, I'd found out more about the weapons on offer and got my head round how to fly without crashing.

Day three of toying with Snoopy Flying Ace was a watershed. I went from being the worst player in the skies to the best, racking up a kill streak of 20 (punching the air, wide-mouthed grinning, incredulous looks at the side of my wife's blissfully unaware face) and wining myself with the pinnacle of Snoopy's plane selection, the Red Doghouse.

Videogames that involve swooping through the skies in a plane are like Marmite to me.

I put it all down to a simple change of tactics, which I'm keeping to myself for now. Suffice to say that in Dogfight and Team Dogfight there is one very simple way to score big and once you've discovered it for yourselves there will be no going back. All I will say is that your choice of weapons is very important.

Jumping back on a few days later, I was pleased that my prowess hadn't faded. But what I also reminded myself of what just how involved these team and solo dogfights can be - particularly on some of the more complex multiplayer modes. These take the simple first person flying and move it towards the FPS I usually go on about here.

For starters there's the stalwart of FPS multiplayers since the dawn of the genre, Capture The Flag. If, like me, you're able to dominate the sky in a head on fight, Capture The Flag will ruin your kill/death count quickly, especially if you've got your heart set on the actual capture.

With the entire opposite team on your tail, it's damned tricky staying alive for long - eight guns pointed in your direction is way more of a challenge and my afore(un)mentioned button bashing trick doesn't look quite so masterful.

More enjoyable of the multiplayer modes is the chaotic Pigskin - an aerial version of American Football. More soccer than American Football, this is a quick paced game that can be over in minutes. Grab the ball, fly it into their goal, score. Or, in reality, wonder what's going on, get shot down, respawn, game ends.

On top of this is the Halo Oddball inspired Dogpile, where you're asked to gain control of a bone for as long as you can, the winning side is the one that's had it between their teeth the longest.

There's only one thing that gets me about this game and that is that this is the first game I've ever played online and achieved a kill death ratio in the positive.

Although, not being my want, I hadn't tried it there is also an entire solo campaign with full co-op mode. I still haven't got past the multiplayer dog fights though - they are such simple addictive fun.

Most definitely getting a twenty kill streak. You only need ten to get Snoopy's Red Doghouse plane, which means I did it twice in one go.

It might be a revisited PS2 game, but Snoopy Flying Ace is an excellent addition to the Xbox Live Arcade catalogue. You can play for half an hour or all evening, the fun doesn't wear off and neither do you need to be an expert pilot to score. It's definitely got the legs to last.

You can support Sid by buying Snoopy Flying Ace