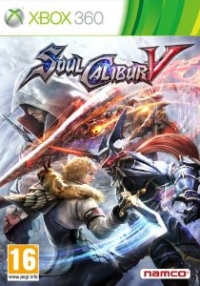 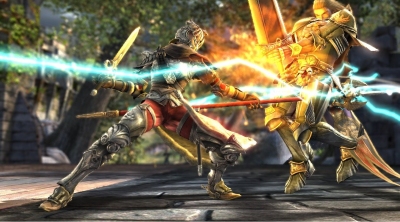 Soul Calibur 5 promises an unlikely return for the series. This was the start of my multiplayer passion and its fifth iteration looks as strong as ever.

There's no better knife edge to cut your teeth on in the world of multiplayer gaming than a fighting game. I remember first encountering Soul Calibur (as Soul Edge back then) on the original PlayStation. I've been transfixed by this out-sized fighting master-series ever since.

Many will decry the ridiculous storyline and fantastical collection of characters and moves. But you can keep your Street Fighters and Blaz Blues with their feet on the ground, give me Soul Calibur's ridiculous love of the bizarre any day of the week.

Soul Calibur V sees publisher Namco Bandai and developer Project Soul finally arrive for PlayStation 3 and Xbox 360 in February. It was a release that seemed like it might never happen. After Soul Calibur IV was wrapped up in 2008 the team was disbanded and to all intents and purposes the franchise had, with Street Fighter IV in the ascendance, run aground.

But outrage in the surprisingly large Soul Calibur community caused Namco Bandai to think again. So here we have Should Calibur V. True to form this is a dyed in the wool Soul Calibur game. Early indications suggest that it ticks all the familiar boxes.

Like its predecessors, Soul Calibur V draws the same stable of Japanese fighters - from the diminutive females to the over sized and cumbersome males. But more than simple gender caricatures each of has their own story and feels different to play. Fighting styles, melee weapons and even guns mean that they need respect and must be learnt to capitalise fully on their abilities.

Along with its fast and loose approach to storytelling is a propensity to include characters from other games and franchises. I enjoyed the inclusion of Link, Darth Vader and Kratos in Soul Calibur IV. This flirting with the great and late of the geekdom continues in Calibur V in the form of Ezio Auditore di Firenze of Assassin's Creed fame.

The story, as much has been revealed of it so far, brings back Nightmare -- although exactly how is unclear as he was decisively dispatched at the end of the previous game. His return, and subsequent world domineering will likely be the subject of the doubtlessly wacky storyline in Calibur V.

This is going to be another compulsory purchase for fans of the series.

Other characters to return this time are community favourite Dampierre (in case you don't remember he's the flashy business like fighter from the PSP game). Series stalwarts like Seigfried are of course included, although now the passing years have had their toll on him -- whereas he started as a young 17 year old fighter, he is now a middle aged man -- so different tactics are required to get the best out of his older self.

Although there is still plenty more to see of the game, I can already tell (with the pieces in play already) that this is going to be another compulsory purchase for fans of the series. The bigger question is whether it will be able to win over new converts with such steep competition from its peers (I'm thinking Super Street Fighter and Blaz Blue here mainly).

However it turns out, it perpetuates my advice for those who want to get into (or understand what all the fuss is about around) multiplayer gaming. Fighting games are the best place to start. Soul Calibur V looks set to continue that tradition in its own inimitable style.

You can support Sid by buying Soul Calibur 5