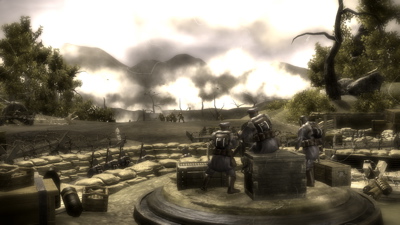 Toy Soldiers delves into childhood toy box and finds a tower defence game with novel first person elements. End to end tabletop plate spinning takes a surprising amount of time to learn before you can hit the multiplayer modes.

Every now and then a game comes along and rubbishes the plan of this multiplayer section. Sitting down to play the training level of Toy Soldiers makes it very obvious that jumping straight into the multiplayer is asking for trouble. You need to learn the ropes, a least a little, first.

Multiplayer consists of two players from opposite ends of the battlefield, tossing waves of troops and machines of war over the top while at the same time deploying their own defences to keep the enemy's waves of blighters out of the toy box.

It doesn't sound too hard when you think that Toy Soldiers is little more than tower defence with real-time planes you can fly and sniper towers you can shoot from. The battlefield is in fully realised 3D, with concrete foundations dotted about for you to place your heavy weapon defences and the enemy can come at you from any angle.

But my own experience of tower defence games has been nothing like this. I'm used to getting a bit of time to plop towers down. I'm used to clearly delineated routes for the attacking waves to travel along and I'm not at all prepared for being shot at by them. When you add in the two player multiplayer equation, Toy Soldiers starts looking a bit more like a Command and Conquer than Desktop Tower Defence.

Every now and then a game comes along and rubbishes the plan of this column.

And there's a lot to learn, so much so that playing through the training level once is not enough. Neither is playing through twice. In fact, after playing it through three times, hopping off to the multiplayer between each go, I am still completely incapable of sending in my first wave of attackers. I can't even stop my opponents first wave from swarming into my toy box base and winning the game.

Apparently it's all on the Y button. So I press the Y button and up comes a small wheel with three options: tanks, bigger tanks and even bigger tanks. I select one. Nothing happens. Or at least, nothing seems to be happening. Somewhere on the battlefield I should have a snaking line of armoured vehicles bearing down on the enemy lines. I can't see them, and I'm too busy trying to work out what defences should go where.

By the time I've managed to lay down a mortar and some heavy machine gunners, my enemy has his tanks all the way across the field and is gleefully bombing me from his bi-planes. Which immediately causes me to panic and act like a headless chicken, dashing from one place to the next, squawking at my cannon fodder troops. I get in a plane. It gets shot down ten yards before I fly it straight into the enemy guns. I try out the tank. That gets blasted into pieces less than a quarter of the way across the map by some big shell-firing thing.

I realise that I'm not going to get far in Toy Soldiers' multiplayer without having completed a hefty wedge of the solo campaign. But here's the rub - I just don't want to. Partly because the training level doesn't fill me with excitement and partly because that would be like admitting defeat 100 metres into a marathon. I could bend the rules a fraction and play one level proper of the solo game or I can plough on with the multiplayer and try to mount the steep learning curve of death. Neither of them looks that appealing.

There's a lot to learn, so much so that playing through the training level once is not enough.

In the end, I opt for some rule bending and hit the single player. After a couple of soirees things make a lot more sense. I discover that the best way to sort out your defences is to attack. Taking control of individual weapons and slaughtering troops as they scuttle across the shell-shocked mud scores you more points, making you cash much faster than if you took a back seat. With the cash flowing you can quickly buy more big guns, upgrade old ones and repair ad hoc. Any vehicles you have can be climbed into and used to attack enemies too, but my favourite is the sniper tower, where you can take pot shots at unsuspecting infantry from across the entire map.

Back to the multiplayer arena I went, feeling more confident. This time, I manfully succeeded in getting one of my waves through my opponent's defences and into the toy box. Never mind that he got ten in and won the game. Never mind that he kept blowing my tanks, mortars, artillery and machine guns to pieces. The fact is I got one wave through. That's a result in my book. Score, for the little man.

But as I started to want to play more multiplayer I had increasing trouble getting a game. After getting kicked out of games for half an hour I decided to come back tomorrow. But the next day was the same, getting kicked, waiting for opponents, getting kicked. The league tables say there's tens of thousands of players, but three days of getting kicked repeatedly before a game lasts the full stretch makes me wonder how many of them are going to bother coming back for more.

Charging across the battlefield in a clockwork tank and coming face to face with your opponent in his very own wind-up wonder, all guns blazing, frantically pulling the trigger in the hope it will reload faster if you do. Magic.

Multiplayer is much harder than solo not just because you're playing against an unpredictable human, but also because this is an exercise in plate spinning. The added extra of sending in your own waves that have to be bought with money from the defence budget means you'll need to be familiar with the maps, weapons and tactics to succeed.

You can support Sid by buying Toy Soldiers