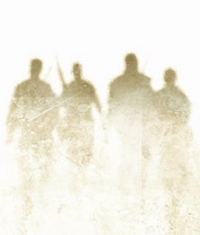 Battlefield Bad Company 2 is multiplayer fantastic, but for totally different reasons than Modern Warfare 2. There is definitely room for both games in my co-operative collection.

There is no doubt that both games are full of action and can entertain for hours, but despite their similarities they are totally different. Modern Warfare 2 is more of a lone wolf multiplayer game - you can take on the team single handed and survive for a good while. But in Battlefield teamwork is key.

Battlefield makes great use of the squad system. Four players, each marked with a green to identify class - Assault, Medic, Engineer and Recon. Each of these fit together like nicely and are each essential. In a tank you will always need an engineer if you come under heavy attack. The assault team can get up close an personal with people and they can be supported by a medic, who provide med kits and de-fib revive units. The recon team can take a step back and help out their team by sniping or 'spotting' enemies. The huge maps make this a lot a fun and give you plenty of places to find that really secluded spot.

Being in a squad with friends is vital.

Helping out your team mates is rewarded with experience points that unlock gadgets and weapons. At moment I am still playing with the different classes but I think I prefer being Recon, mainly because I can play a part without ending up in the thick of the action - and soon after on the floor hoping to be revived.

Being in a squad with friends is vital. I spent most of a day playing with squad members I didn't know. I was scoring good points but the team was losing the round every time. In the evening I played with the gang of Dads I normally game with - we never lost a round. There was much more communication and we were pretty unbeatable. I even ended up as the best player in one of the rounds.

I've played a lot of Modern Warfare 2 as well and this multiplayer teamwork depth isn't there. You can jump in and just start shooting the bad guys, earn your experience points and unlock new weapons and perks. Nearly all the maps are tight and very fast paced and allows you get lots of match in if you don't have as much time.

Bad Company 2 has more varied multiplayer modes. You have your standard death match, team death match and the like, but you also have the fantastic sabotage mode - great for picking up experience points. It's my favourite mode mainly because it's complete chaos.

Both games show you your stats and allow you to compare them on the leader boards and with your friends, on top of that there's a site to see all of your battlefield stats in detail as well.

Although I'm really enjoying Battlefield 2, it has it's downsides too. At times it can be frustrating. The complexity of the multiplayer classes and unusual play style means that it has a steep learning curve that could put a lot of people off. Also the larger maps can mean that it is a little solitary at times - particularly if you are not playing with friends.

I love Battlefield Bad Company 2 and Modern Warfare 2 for very different reasons. I wouldn't want to give up the focused adrenaline rush of the later, but also I'm really enjoying the team antics of the former. I love the fact that both are so good and both are so different. I'll be playing each of them for many months.


You can support Sid by buying Modern Company or Bad Warfare?