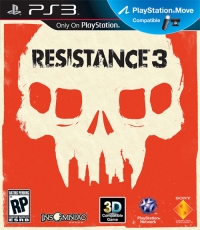 Other GamePeople columnists have reviewed this from their perspective - huh?:
Family Podcast (PS3) 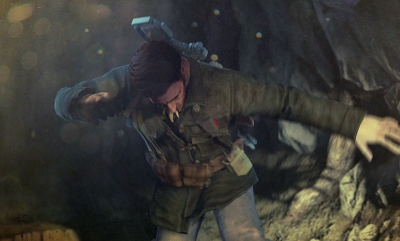 Resistance 3 finally delivers local and online campaign co-op, but it's the range of pacing and emotion that makes this game in the series stand out.

Because I only really enjoy videogames I can play with other people, I wasn't hugely into Resistance 2. Don't get me wrong, there was plenty there to enjoy -- even a good bit of multiplayer action. However, my favourite part of first person shooters is playing through the main story with a friend and Resistance 2 didn't let you do that.

You could play Deathmatch and objective based arena multiplayer matches online, or you could play some co-op specific levels, but you couldn't play the main game with someone else. Resistance 3 sets all that straight. Not only does it promise to offer online cooperative multiplayer for the main campaign, but it will also provide a local split screen version.

Alongside the greater focus on campaign multiplayer this time round Resistance Fall of Man is a lot darker. You play as Joseph Capelli who's trying to avoid the Chimeran invaders that terrorized him in the military and make a new life for himself in Oklahoma with his wife and son. But the aliens soon find him.

This means that Resistance 3 no longer puts you in charge of a crack squad of soldiers, instead you're a one man band, dishonourably discharged from the army. The game uses this story well and proceedings inherit a bleak desolate feel to them. From the wind rustling though the dead forest, to the war-weary survivors standing around in shock or the dappled light seeping through broken windows you are constantly aware that there is a sadness to the world you play in. A slow defeat is being fought here, like Tolkien's retreat of the Elves from middle earth.

This is familiarly bleak territory to those who have played previous Resistance games. However, as things slowly unravel for Capelli, he is fortuitously assisted by an enticing arsenal. Each of the weapons has an alternate fire option, but it is the difference between each firearm that really impresses. It takes time to learn how they handle, and how best to use them.

This learning process is helped somewhat by being able to access as many weapons as you have collected -- via the weapon wheel selection approach from the first game. What starts as a restrained set of options soon opens up to include all sorts of weird and wonderful Chimeran weapons.

Greater focus on campaign multiplayer this time round.

Resistance 3 is a shooter that has its eye on more than gun gunplay though. As I mentioned, the sense of drama and suspense promises to ring out right through the experience. One stand out moment I've seen so far is in the St. Louis level where you trudge through dark underground cellars. Here, Resistance feels more like a survival horror game than a shooter. As the Chimera start bursting out from their embryonic pods I almost forgot what game I was playing.

Another interesting part of the puzzle are some technological advancement over the previous game. Like Killzone 3, Resistance now has full support for the Move controls. It has to be said that these are a nightmare to get used to, but if you make the effort the rewards in accuracy, immersion and realism are huge. This is then backed up with the option to view the game in 3D if you have an appropriately equipped screen.

Being a big Halo fan (sorry, I know it's not the form to mention the "other" platform in a PS3 exclusive review) I was impressed to see that Resistance 3 also offered more advanced enemy AI this time round. Halo still stands out in this respect for me, creating enemies that are as believable as their human counterparts. Whereas many cheaper PlayStation games are more artificial than intelligent, Resistance 3's enemies bear the marks of coordinated strategy and self preservation -- where the last standing will retreat to cover.

The weakest part of what I've seen of the experience so far are moments when the smooth running of the game - both visually and structurally take an unexpected dip. Some of the huge bosses seem a little easy to defeat while there are certain chock points that are almost impossible to negotiate without dying.

Bleak middle-America is a popular place to ply your first person shooting wares.

But where previous Resistance games didn't have the range of experience to compensate for shortcomings, this third iteration has more than enough to make you forgive a few misdemeanours. Not only the multiplayer support, but also a genuine range of emotion and pacing that make it, at times, feel more like a film than a videogame.

Bleak middle-America is a popular place to ply your first person shooting wares, but Resistance 3 manages to stand tall alongside its peers.

You can support Sid by buying Resistance 3