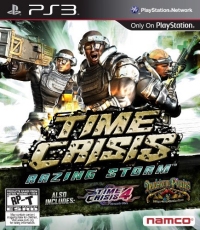 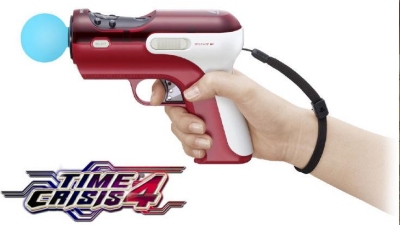 Time Crisis is an on-rails light gun game where the player is left to focus on the shooting while the game handles movement. I've been a fan of the series from the moment I stepped on the arcade pedal and popped out from cover to (if you'll excuse the colloquialism) cap a bad guy. It was ahead of its time. Not only offering a new light gun experience but foreshadowing a cover system that would come to fruition in first person shooters many years later.

Add to that its branching multiplayer mode, where players split up and join forces as they progress through the story, and you had the making of a cash gobbling monster.

The magic of an arcade game still holds sway for me. Something about the extra investment in bespoke circuitry, controllers and cabinets seems to add both finesse and solidity to the experience.

Time Crisis: Razing Storm brings all this to the PS3 and wraps it around the Move controls. The first impressions are good. Calibration is easy and shooting accurate. There is a little lag, but compensating for this is all part of the light gun experience.

The headlining Razing Storm arcade mode does all it should and retains enough of that arcade sparkle. But straight off I could tell that something about the packed-in version of Time Crisis 4 still shines a little brighter. Razing Storm ticks all the boxes but misses some of the cover based game play and fails to capitalise on different weapons.

The maps are small but work well, giving proceedings a claustrophobic edge.

Beyond the arcade shooting, both Razing Storm and Time Crisis 4 offer a rather unusual Story mode that takes the series into ill-advised First Person Shooter (FPS) territory. Although Time Crisis may have been the granddaddy that precluded not a few of the FPS tricks, a lot of water has passed under the bridge since then.

Next to "proper" FPS games, these off-rails modes are simply too awkward to be much fun. You control movement by picking up a PS3 Navigation controller - or Dualshock 3 - and then aim and turn with Move's pointing abilities. It feels odd and stilted and has taken no credence of the Wii's great strides forwards with games like Metroid or The Conduit. Razing Storm seems unaware of anything like a bounding box, dead zone or sensitivity settings.

Surprisingly though you can take this FPS mode online, where it actually benefits from human opponents. And with multiplayer modes like Deathmatch, Team Deathmatch, Capture The Flag and King of the Hill in both ranked or public matches there is quite a lot to experiment with. The maps are small but work well, giving proceedings a claustrophobic edge.

The package also includes Deadstorm Pirates which, apart from having to be installed before it can be played, offers the broadest experience of the trio. As a set they are well balanced and each offer a distinct experience around Move's aiming controls.

Razing Storm focuses on weight of firepower and destructible environments, while Time Crisis 4 keeps to the usual formula of weapon switching and cover. Deadstorm Pirates ditches both cover and weapon systems completely in an effort to make things more accessible - which works well.

Each experience only really works well when you are playing alongside someone else.

All three are fast paced and able players will be through them in around an hour each. The idea is of course that repeat plays will reveal hidden bonuses, power ups and improved scores. But each experience only really works well when you are playing alongside someone else. Then your score and hit percentages start to matter as things get more competitive. It's a shame that this is limited to just two players, as this leaves four player light gun still uniquely available in Ghost Squad on the Wii.

Time Crisis: Razing Storm certainly tries hard to deliver a compelling on-rails multiplayer experience. So hard in fact it has been driven to not only include three games for the price of one, but step out into online FPS multiplayer.

I ended up spending most of my time, revisiting the magic of the earlier games with Time Crisis 4 - which in my book is still one of the best multiplayer shooting experiences you can have, regardless of the perspective or on-rails nature.


You can support Sid by buying Time Crisis: Razing Storm