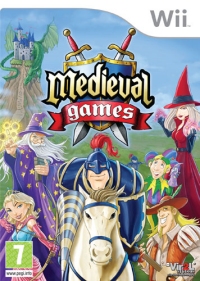 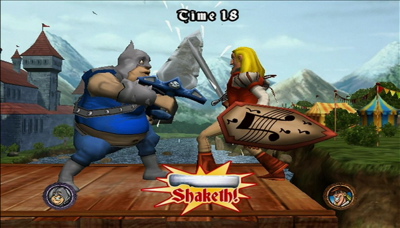 Medieval Games Wii crosses board games with party gaming in a Middle Ages setting. Sadly though, for multiplayer gamers it fails pretty miserably.

I've seen multiplayer games that are impossible to pick up and play, games that require only the briefest of tutorials and games that blossom from seeming simplicity into headache inducing tactical warfare. Rather surprisingly, we've yet to come across a game that needs no tutorial, is simple for all yet fails to engage one single player. Medieval Games is that game.

Medieval Games is a party game that you can play either alone, against the computer or with friends - no online content to speak of. Like Wii-Play or Wii-Sports, Medieval Games is a collection of mini-games. But the twist here is the introduction of a board game format, presumably to give the game a little bit more spice and an element of luck.

Not a million miles from Mario Party, four players start at the entrance to a maze. Rolling a dice, you are then allowed to move your character until you land on a game. These are then either solo play or all play - although even the solo play involves the rest of your party. For example, in one solo player game you need to dance around over four coloured squares while your opponents throw banana skins onto the dance floor in an effort to trip you up. In another, you need to capture three pigs while your opponents control the little squealers. And both of them are dreadful.

With no online play, I had to actually wait till my house had some guests in it to play this.

With no online play, I had to wait till my house had some guests in it to play this multiplayer. The kind of guests who, when they hear the words new game get all excited and competitive. So it was a Saturday night before Medieval Games came out of its case. A quick character selection later, and the four of us were ready to play, hunkered down around the TV, gaming thumbs itching like crazy. Five minutes later, I had a living room full of disappointed gamers calling for my head.

The problem is that party games should be little pockets of fun in a digital format. Medieval Games is a little pocket of sadness. The first all play game saw us armed with bow and arrow, shooting at fruit and veg tumbling down the screen, which was promising I must admit. There were laughs and mock anger as we argued over ownership of each particular apple, and when it finished there were the usual pride filled claims of superiority, but all that fun withered away faster than a grape under a Californian sun.

There's nothing really to say about Medieval Games, nothing complimentary in any case.

We played a pig catching game. My guest failed to capture all three pigs and uttered the words: this is rubbish - or words to that effect. He was not a happy man. The extent of his rant, and the rainbow spectrum of colourful language he used powered the nails into Medieval Games' coffin like a jack-hammer into a block of lard.

The only half decent game here is the fruit shooting, which is about as fun as walking away from paint that's only half dry.

There are other, more Medieval minigames in this game, such as jousting and sword fighting, but we never made it to them simply because it was such a disappointing start. Be weary of picking this up - your children may enjoy it but if your a multiplayer gaming fan of any type, Medieval Games will just make you want to turn it off and play something else.

You can support Sid by buying Medieval Games