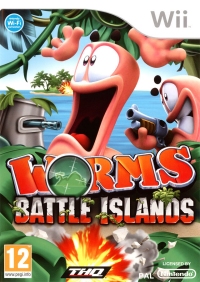 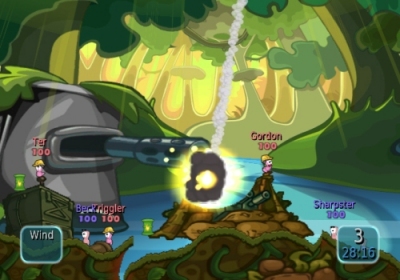 Worms: Battle Islands Wii doesn't add much new to the Worms formula, but to be honest with Worms' simple but addictive multiplayer warfare it doesn't really need to.

Sometimes, one review style doesn't fit all readers. With this in mind, I'm going to review Worms: Battle Islands twice, for different readers. Pick your poison:

Review 1, which is very short and for people who have played Worms before.

This is a Worms game on the Wii, and they haven't messed it up too much. The controls, which require players to hold the wiimote sideways, get a little getting used to, but otherwise play is as intuitive as ever.

The campaign mode skips from archipelago to archipelago as you conduct a war, and each group of islands ends with a boss battle using limited resources.

Multiplayer remains the meat of the game.

The multiplayer remains the meat of the game, and there's a good selection of terrain available, and the quick rounds with sudden reversals of fortune remain as fun and furious as ever. There are some weapons customisation modes, but these are largely irrelevant faffery.

Review 2, which is longer and for people who have not played Worms before.

Worms is a blissfully simple, fast paced strategy game. Players control small teams of worms, fighting for a horizontal strip of randomised terrain. Various - but finite - weapons and tools are available, and players take turns to pick a worm, move it and perform an action. Last worm standing wins.

The pleasure of Worms is in the cartoonishly sadistic execution (and, indeed, executions). The worms aren't fast movers, what with being worms and all that, so there's a delicious tension in watching one cutely squirm into place before throwing a grenade, which gracefully sails through the air - only to rebound off a piece of terrain, land on the worm that threw it and blow him to bits.

You will have a lot of raucous fun.

Well, not quite bits. No gory chunks a'flying here. Instead, once the life of a worm has been whittled away they wave a white flag and explode, leaving behind a tombstone which will remain as a physical object in the environment for the rest of the game.

It's fast and funny, Worms.

This version is set around the idea of Battle Islands, arranging the different terrain options into an archipelago rather than just having them on a menu, but that's just window-dressing really.

Best to cut through all the customisation options and settle in for a few rounds of hectic, strategic worm warfare. You will have a lot of raucous fun.

There's nothing quite like the cry of 'That's him finished!' in a squeaky worm voice as a particularly tenacious enemy worm is blown away, and the satisfaction of seeing your opponent slump on the sofa next to you as their last worm is wiped out.

For face to face, fast turnaround strategy gaming with a cartoony twist, Worms is a long-term favourite. While holding the Wiimote sideways isn't the most natural control system - certainly compared to using the stylus with networked DSes, for instance - this is still a proficient iteration of a compulsive game. While it doesn't offer much new for Worms veterans, newcomers should find this a sound introduction to the series.


You can support Sid by buying Worms Battle Islands