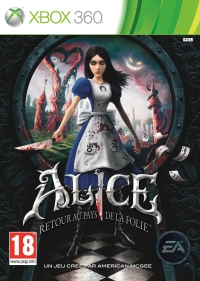 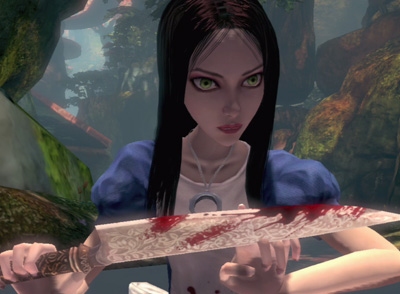 Alice: Madness Returns follows American McGee's Alice, release back in 2000. Picking up eleven years after the original, Alice is now in her twenties and more in control of her delusions as she once again jumps through the looking glass.

Alice: Madness Returns attends to the time that has passed since the original American McGee's Alice. Now in her twenties she has gained better control of her own psyche, and this is reflected in the structure of the game. Rather than being dragged down a linear path by her delusions about the death of her parents she is now able to decide her own path through Wonderland from the hub of her London home.

Wonderland itself has also aged, with the events of the original game having left their mark. Every area looks unique, but all with a ruined, morbid undertone. Take Queensland for example, the old home of the Queen of Hearts, it is now filled with zombie-like playing cards that stalk Alice as she ventures through the world.

Exploration will not simply focus on the immediately visible either, with Alice's penchant for altering her size playing a vital role as she shrinks at will to access new areas, and grows by eating cake to crush anything that wishes her harm.

Not wanting to be unprepared Alice also has spent the last eleven years refining her fighting techniques. Rather than the slow combat of the original our heroine is now equipped with a blade, a pepper grinder that functions as a shotgun and is able to dash at great speeds between attackers in a cloud of butterflies. This shift in combat makes the game play feel far more modern, and again plays into the idea that this older Alice is now far more in control of her mind, and the situation.

If developer Spicy Horse can deliver the same strong narrative and artistic style, as well as building a strong game mechanic, Alice: Madness Returns could be a real treat for those looking for a story driven experience where the game itself isn't just an after thought.

You will be able to jump down the rabbit hole with Alice on PS3, 360 and PC when it is released this June.


You can support Paul by buying Alice: Madness Returns