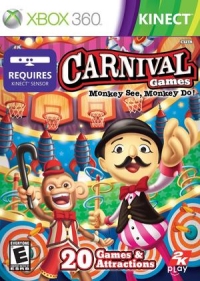 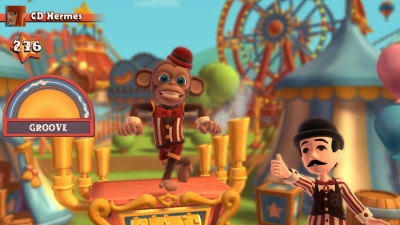 Monkey See, Monkey Do will feature 20 activities, including 10 old favourites (such as Alley Ball and The Wheel of Chance) and 10 new games exclusive to Kinect. Additional downloadable content is also planned after launch.

The titular Monkey See Monkey Do mini-game involves dancing with a chimp on screen and trying to match his poses. Other Kinect games include moving your arms to steer a rocket past obstacles, and a Hole in the Wall style game where you need to contort your body into a position where you can pass through a configuration of blocks.

As with previous games in the series, mini-games reward tickets which can be exchanged for game items and accessories, or are used to access additional carnival attractions such as The Amazing Wodin, a wizard who tells jokes and fortunes using Kinect's voice recognition capabilities.

Carnival Games: Monkey See, Monkey Do is a Kinect-exclusive, coming to Xbox 360 on April 15th.


You can support Paul by buying Carnival Games: Monkey See, Monkey Do