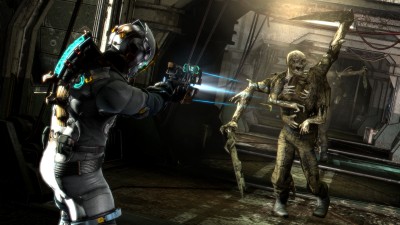 Dead Space 3's announcement of a co-op story mode throughout the entire game will be mixed news. Anyone who has played Resident Evil 5 will know it isn't necessarily a recipe for a great game. But, at least Resi 5 was an experience my partner and I could enjoy together.

I'm a huge fan of co-op multiplayer and any game that has the generosity to provide large amounts of co-op gameplay is okay in my book. Games which offer co-op for the whole story seem like a dream come true. Resident Evil 5 did just that and while it wasn't a great game, it wasn't the co-op that broke it - in my opinion. My partner and I played through the entire game on our sofa, thoroughly enjoying the split-screen mode.

Dead Space 3 will offer a complete co-op experience from start to finish. If you're wondering "Does Dead Space 3 have split screen co-op?" I'm afraid the answer is no. To my huge disappointment, the only way to play co-op is online, sadly shunning those of us that like to play co-op games with our nearest and dearest (or housemates, if you don't have a nearest or dearest to hand). This means that the only way to play the person sitting next to me would be to buy a second console and play each other via the internet.

This is sadly shortsighted and b like a step backwards. Uncharted 2 had great co-op that was restricted to online, but at least in Uncharted 3 they gave us a great boost by providing splitscreen co-op. Perhaps not providing co-op is a way of saving development time in a game, or maybe it's in the belief that forcing people online will somehow boost sales by encouraging double-purchases. Either way it's a big disappointment for co-op fans.

It's a pity because, in other ways, Dead Space 3 is shaping up to be a great-looking game. Taking more cues from classic film horror, The Thing, much of the action has moved to an ice wasteland populated by more of the series' terrifying distorted-corpse-aliens.

There has been concern in some quarters that the series has shifted away from tense horror to more out-and-out arcade shooting, but I think that kind of development will be best judged once the game is out in the wild.

Dead Space 3 is currently planned for release on the Playstation 3, Xbox 360 and Windows PC on the 8th February 2013.


You can support Paul by buying Dead Space 3