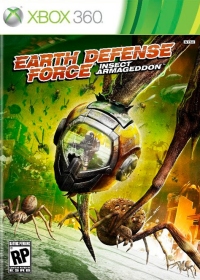 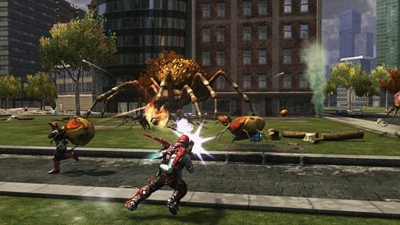 Earth Defense Force: Insect Armageddon brings us more chaotic fire fights, massive insects and of the return of the jet pack. Happily, it seems to be keenly aware of what make the franchise popular and is sticking to it, despite a change in developer.

Earth Defense Force: Insect Armageddon continues the series' theme of a group designed to protect the world from giant insects. It will be the first game in the franchise to be developed by US based Vicious Cycle, rather the Japanese Sandlot. With the series so joyously embracing B-movie aesthetics this change has worried fans that the new game my lose some of its chic. This skepticism is looking unwarranted however, because Insect Armageddon looks as much budget fun as ever.

Insect Armageddon's understanding of its roots is clear as you look at the combat. Maintaining a sense of power and risk, engaging with a horde of giant insects sees you able to mow them down with ease, but the risk being swarmed is ever-present. Keeping track of everything around you and constantly juggling the between weapons is the only way to ensure survival in these fraught attacks and it leads to some frantic fun.

To help you stay alive Vicious Cycle are also reintroducing the Jetpack. Though present in the last PS2 game (Global Defence Force) the device never made it to its 360 cousin (Earth Defense Force 2017). It is an addition that could make huge changes to the gameplay offering a new dimension to both escape and attack. It also stands as just one example of the developers listening to the fans demands, along side the introduction of random weapon drops and online multiplayer.

Online co-op play is the most dramatic addition. This allows you to join five friends rather than just the two-player local split screen of earlier titles. In a game so reliant on its frantic fire-fights against massive insects on the ground and alien ships in the air, co-op alone could be enough to push the games appeal from niche to mainstream in combination with its frantic over the top fun.

Hopefully Earth Defense Force: Insect Armageddon will create a buzz when it releases on PS3 and 360 this autumn.