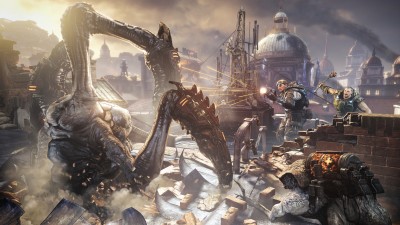 Gears of War: Judgement is a return to the exciting and ultra-violent shooter series that earned a place alongside HALO in defining the Xbox 360 experience. A bigger co-op opportunity and improved replayablity could make this an instant classic.

Gears of War: Judgement is a kind of prequel to the original games. The campaign story goes back to the immediate aftermath of Emergence Day, some years before the events in the first Gears of War. With a new story comes new characters and this time you play Damon Baird and Augustus "The Cole Train" Cole leading their soldiers into battle. As with previous Gears games, Gears of War: Judgement is an Xbox 360 exclusive.

The world of the game series has been fleshed out in great detail and Gears of War: Judgement will be an opportunity to explore even more. In addition to the main story, the game will feature a series of bonus missions, unlocked by uncovering information in the main story, which will give further insight.

To help the game feel fresh each time it is played, the developers have worked hard to ensure that enemies do not always appear in the same places, even on repeated playthroughs or particular multiplayer scenarios.

There are also new multiplayer modes promised, with one being revealed as a mode called "OverRun." This is an objective-based game for teams of five. More multiplayer modes will be announced as the game nears completion. Coop play is available for up to four players online. It's hard to say at this stage whether splitscreen will feature in Gears of War: Judgement. Previous games in the series have featured splitscreen, but only for two-player modes.

Gears of War: Judgement is currently planned for release in early 2013.


You can support Paul by buying Gears of War: Judgement