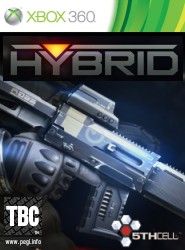 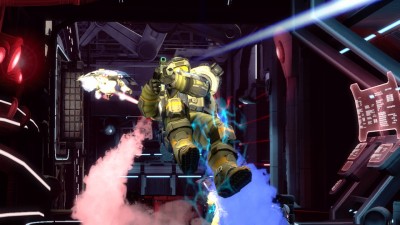 Hybrid is the new game from Scribblenauts developer, 5th Cell, this time taking up arms with a cover-based thirdperson multiplayer shooter.

Hybrid is a long way from Scribblenauts -- a very high tech futuristic shooter that makes extensive use of cover (something much more common with singleplayer than multiplayer modes on other games). It even providing some variation with jet packs which will allow you to fly around the map as well.

It looks like there is a dizzying selection of weapons from which to choose as well as player abilities. The whole experience should be very slick, with consistent 60 frames-per-second promised in 720p. Additional the results of matches are persistent, contributing to an overall worldwide ongoing battle.

If there's anything amiss here at all, it is that there is very little to set Hybrid apart from the legion of other multiplayer shooters available. Even if the finished product is of exceptional quality, it may struggle to get players' attention and with multiplayer shooters, numbers are everything.

Also of concern is the flying element. Most games that have tried it have found it to be tricky to integrate well with gameplay, especially with a console gamepad. However 5th Cell have demonstrated with Scribblenauts that they can take an idea that seems impossible and make it work with aplomb. It will be really interested to see if they can inject some excitement into an occasionally stale genre with Hybrid.

Hybrid is currently planned for release on the Xbox 360 via XBLA during summer 2012.


You can support Paul by buying Hybrid