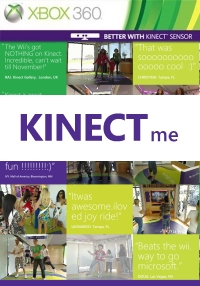 Kinect Me looks like it will bring a Windows Phone 7 rendering of your social world to the Xbox 360. It's a presentation popular on the iPad's Flipboard application and enables users to view their social content in a newspaper presentation. Add in hands-free controls and this looks rather interesting.

Kinect Me promises to combine controller free gaming and the social media world. Drawing on the positive reception to the Kinect Me website the game takes the Windows Phone 7 style presentation and incorporates it into the 360 experience.

Alongside functionality on the console itself this is likely to be supported by mirrored functions on Windows Phone 7 devices (which now include Nokia handsets as Microsoft look to leverage their new phone OS). If this is the case, there is likely to be considerable interoperability between the two devices as well -- adding to the existing functionality like being able to edit your 360 avatar on your Windows Phone 7.

The letter-boxed interface style of the phone could work well for controller free navigation, where players can simply reach out and touch the screen to read status updates, links, pictures and videos. This style of interface was recently popularised by the iPad's Flipboard application that presents RSS, Websites, Facebook, Twitter and other social media in a newspaper presentation.

If Microsoft can achieve this style of presentation on a Kinect controlled 360, and tempt enough content providers to get on board, this could be a substantial coup for the 360.

I expect Kinect Me to be formally announced at E3 in June.

You can support Paul by buying Kinect Me