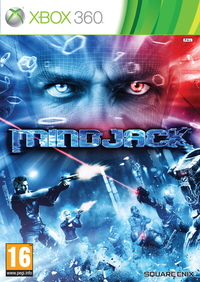 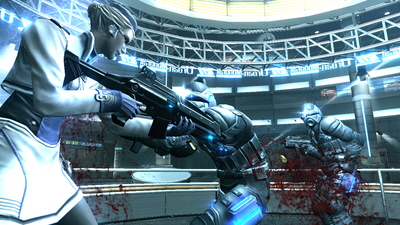 Mindjack mixes the familiar and the new to twist our perception of an online shooter. Interesting multiplayer modes and role playing elements make this a slightly different run and gunner.

Third person cover based shooters seem to be the flavour of the generation since Gears of War showed us how much fun they can be. Since then, numerous titles haven't really done much to move on the mechanics of that perfect slice of testosterone charged brutality.

Mindjack from developer Feelplus on first glance doesn't really add much to that mix either giving you the standard levels full of handy barriers to hide behind. It does have a few tricks up its sleeve though and it's not just the ability to possess other characters in the game that makes it interesting.

Not only can you jump between people, including your enemies, but so can other people. A little like ill-fate The Crossing, Mindjack enables other people to join your game via the power of the Internet and either help or hinder you.

This has the possibility to make your games incredibly fun or extremely frustrating, since whenever you let people play online, the temptation to grief others is never far away. The responsibility then is with Feelplus to make it more rewarding to play the game than subvert its mechanics.

The other must-have convention of late is the addition of role playing mechanics and Mindjack is again on hand to provide you with a chance to earn experience points and buff your character.

Interesting concepts mean Mindjack will be one worth watching when it arrives in 2011 for PlayStation 3 and Xbox 360.

You can support Paul by buying Mindjack