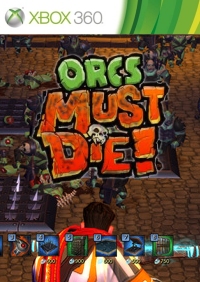 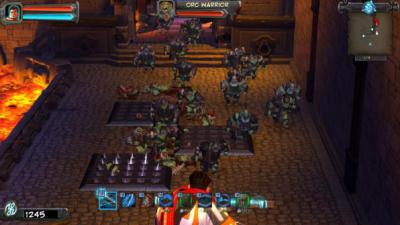 Orcs Must Die is a blend of frantic third person action and tower defense strategy elements, all with an orcs storm the castle theme.

From the people behind Age of Empires and Halo Wars team, this is an evolution of their previous work (Age of Empires Online). Orcs Must Die gives you the straight forward task of defending your castle from armies of marauding orcs and ogres. Simple in concept but far from it in execution as you scramble to hold them off.

Viewed from a third person perspective the most direct way to prosper is to use your sword and crossbow, but with so many attacking these weapons soon prove insufficient for the task. Fortunately you have some other tricks up your sleeve, with the ability to lay traps, conjure spells and even call on elf archers to aid in the task of defeating the green skins.

The game in action is impressive and enjoyable, and one that shows off Robot Entertainment's roots - despite the fast paced action there is a defiant feel of the strategy game play running through all this.

This appealing hook and cartoony visuals mean that Orcs Must Die! looks like a lot of fun. However with so much going on, and such a fast pace of play, a lot will ride on Robot Entertainment's ability to ensure the controls do not get in the way.

Orcs Must Die! will releasing for PC, PS3 and 360 download later this year.


You can support Paul by buying Orcs Must Die