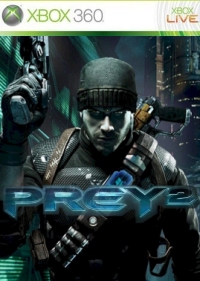 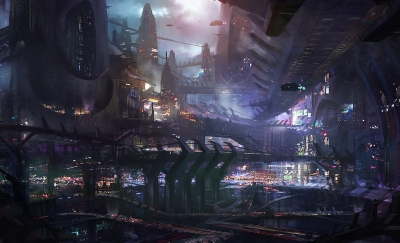 Prey 2's enemies will respond differently depending on how you approach them. It's a small change but something that signals a wider reworking of the balance between role play, shooting and puzzling of the original.

Prey 2 is being developed by Human Head, and marks a clear departure from the first game. Alien worlds reminiscent of Blade Runner and a range of AI behaviours that react to your strategy suggest that Prey 2 could be an FPS with some interesting organic RPG elements.

With the original Prey having ended decisively, Prey 2 also sees a change in both characters and setting -- while of course retaining the portals that made the first game so unique. The overall feel here will be shooting rather than puzzles -- something the original was criticised for.

You take the role of Killian Samuels, a US marshal, with things kick off during events of the first Prey. Moments later aliens knock him unconscious and take to another part of the galaxy where he becomes a bounty hunter in a city known as The Bowery. In this beautifully realised city Killian must gather gadgets and any number of other devices to help him track his targets.

Screen shots look incredible, creating a real sense of atmosphere to The Bowery, and it is a reality that the inhabitants are only too willing to cement. While Human Head have moved the focus away from portals and back to combat, this doesn't mean everything is to be predicated on running around shooting.

The alien inhabitants react to Killian's posture as he approaches them. Come with your gun holstered and you will receive a different response from approaching them with a weapon drawn, which will itself offer a number of reactions depending on the disposition of the target in question. It may not offer the extensive dialogue trees of more explicit RPG experiences but it is an organic method of offering branching paths to the story.

Prey 2 may be a departure from the first game, but all the changes seem to be for the best. With a sci-fi film noir feel this looks like it will be more than just another alien shooter when released on 360, PS3 and PC in 2012.


You can support Paul by buying Prey 2