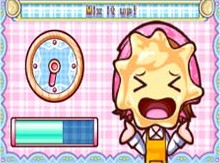 Cooking Mama 4 brings the series to its debut on the 3DS with a range of familiar games and some new surprises.

If you've never played a Cooking Mama game before, the series offers a series of mini-games which are fun cooking-based tasks, such as chopping, grating, mincing, and stirring - all using the stylus. The game scores the player based on their control and accuracy to produce the end results.

Cooking Mama 4 looks to be a return to the style of previous games with over 60 recipes to try and 200 mini-games. Also provided is the option to combine two recipes and even take on other timed tasks such as setting the dinner table. But, what new features can be enjoyed on the 3DS?

Firstly, the 3DS' motion controls have been used to great effect to provide a range of flipping, shell-breaking and catching tasks. This will complement the touch-screen based activities to create an even more immersive and thoroughly enjoyable arcade cooking distraction.

The 3D display is also put to good use. The majority of the action in Cooking Mama 4 takes place on the lower display, using the touch-screen. On the upper screen players can look forward to food flying out of the screen, amusing reactions from Mama and other surprises.

Multiplayer makes a welcome return with up to 4 players taking part in a cook-off competition with each other. Previous versions of Cooking Mama have made use of the DS' download play feature, in which a single game cart can be used for all 4 players. We'll be very interested to see if this 3D version of Cooking Mama does the same, so we'll await the full game to find out.

Cooking Mama 4 is currently planned for release on the Nintendo 3DS on November 25th 2011.


You can support Paul by buying Cooking Mama 4