Other GamePeople columnists have reviewed this from their perspective - huh?:
Race Gamer (PS3) 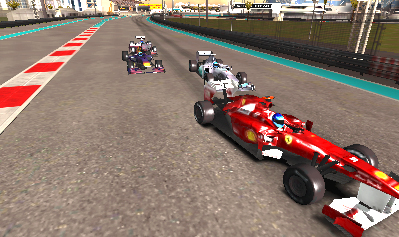 F1 2011 makes some concessions to the handheld nature of the 3DS, but still promises to deliver the most complete racing simulation on the 3D console.

The 3DS is not short of driving games of all shapes and sizes, perhaps because the 3D effect works so well with the visuals of a road stretching away in front of the player. But as any fan will tell you, Formula One isn't like other kinds of racing games. The comparative conformity of the vehicles (as opposed to the cosmopolitan range of vehicles in a title like Cars 2) pushes the difference between victory or failure into the realms of pit strategies, technique and careful vehicle tweaking.

Bringing the depth of the Formula One experience to the handheld 3DS is an intriguing proposition. It will be interesting to see how the stamina required for F1's lengthy competitions fares on the handheld device, especially with the discomfort which many report with using the 3D mode long-term (although this can, of course, be switched off).

However, on a console renowned for bite-size gaming it's always satisfying to have the opportunity for a more in-depth challenge. This is certainly a title I'll be considering for my next holiday. That isn't to say the unique nature of the 3DS hasn't been borne in mind and F1 2011 features a series of micro challenges alongside the full competition. This will provide the quick drop-in gameplay which many are looking for on the handheld.

F1 2011 also features fully online multiplayer for up to 4 competitors. This doesn't allow for fully human-controlled races of up to 26 cars as in the real world of Formula One, but it's great to see another game implementing full online play on a Nintendo machine. Hopefully this is the shape of things to come and I'm sure that even the limited multiplayer will still be a huge bonus for F1 2011.

Perhaps of more interest is the option for online co-operative championships, in which two players take on the roles of a single team's paired drivers. Those wishing to relive the thrills of Lewis Hamilton and Jenson Button side-by-side will now have the chance.

It will be good to see a racer of such maturity and depth coming to expand the 3DS' growing library of titles. I just hope that the technical limitations of the smaller machine do not impede the full experience of the FIA World Championship.