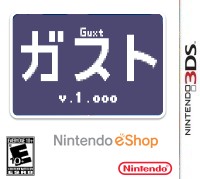 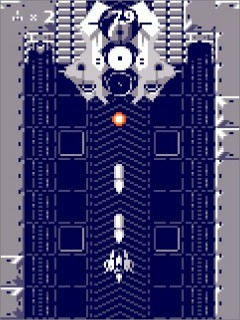 Guxt was once another Indie PC title from the one-man game creator that gave us Cave Story. Following the success of bringing an updated Cave Story to the 3DS, Guxt is next in line to appear, taking advantage of the 3DS' wide display.

Scrolling shooters come in waves, just like the enemies that pour in from top, sides and bottom of the screen. Some years they seem to have disappeared without trace and then another year there is a resurgence of bullet dodging and falling powerups. One scrolling shooter that has inspired great love among its fanbase is the free-to-play (on PC) Guxt, a scrolling shoot-'em-up lovingly crafted by a single programmer, known as Pixel.

Pixel is also famous for Cave Story, a retro-style adventure which went on to receive a laving 3DS remake. Guxt is following in those shoes to come to the 3DS, but there are a few features that seem odd.

Guxt 3DS is apparently to use the 3DS in portrait/book style, according to the developers' Twitter feed. This is great news for the game itself, which is designed to be viewed in a portrait viewing mode (and using the 3DS horizontally would have necessitated breaking the action across two screens).

But, holding the 3DS vertically means that the 3D display will not work. Whatever plans there are (if any) to update this game for the 3DS, a vertical display mode will disable the 3D effect. It will be interesting to see how an essentially 2D game will be received on the 3DS fan base; Alternatively, maybe this updated version of Guxt will have other surprises in store for the update which do use the 3D effect.

Guxt is currently planned for release on the Nintendo 3DS in 2013.


You can support Paul by buying Guxt