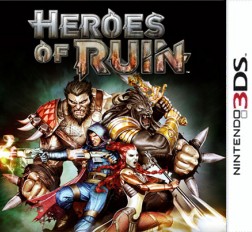 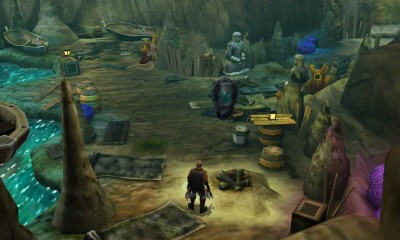 Heroes of Ruin brings four-player co-operative dungeon crawling to the Nintendo 3DS. But will it do enough to bring players together?

Imagine that there are four of you in a fantasy dungeon: A Barbarian, a wizard, a girl and an elf with a bow. For gamers of a certain age that is enough to cause tremendous excitement. The arcade and home versions of Gauntlet created a template for co-operative role-playing games that is still a valid benchmark. It was exciting enough that we even attempted to get four players controlling each character, each using a corner of a cramped Sinclair Spectrum keyboard.

Currently in development is Heroes of Ruin. A single- or multi-player dungeon crawler for the Nintendo 3DS, which promises drop-in/drop-out co-op for up to four players, using the console's wireless features. Like Gauntlet before it, it promises four distinct player classes from which to choose.

In addition to the basic multi-player co-op, there is a Streetpass marketplace feature which allows players to trade and sell items with passers-by. Player achievements and quest details can be shared via the game's website, providing an deep online community. Also promised is a weekly quest feature, which will provide players with regular challenges and content, even once the main campaign has been completed.

Heroes of Ruin will also provide randomly generated dungeons. These can be a mixed affair. The success of Rogue-style games demonstrates the appeal of keeping dungeon layouts mysterious; at the same time, other titles have failed to provide random dungeons with sufficient intrigue to maintain interest. It will be interesting to see how Heroes of Ruin tackles this tricky feature.

Personally I am very excited about the possibilities for Heroes of Ruin, but with a little caution. When I hear the words "four-player co-op" I am always thrilled and it is only when the words "via local wireless" eventually appear that my heart sinks. While getting four people around a beloved Sinclair Spectrum was a feat, finding four 3DS owners with the same copy of a game in my small town would be a miracle. Here's hoping that among Heroes of Ruin's list of fantasy creatures is that one legendary beast: a 3DS game with online multiplayer.

Heroes of Ruin is currently planned for release on Nintendo 3DS in 2012.


You can support Paul by buying Heroes of Ruin