Lego Lord of the Rings 3DS 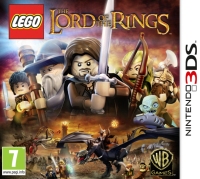 Lego Lord of the Rings is the latest fun-filled take on a movie franchise to be re-enacted by Lego minifigs in this multi-platform romp across the entire trilogy.

If I'm honest I still haven't totally made my peace with the Lego games using voice dialogue. Thinking back to the original Star Wars games, part of the series' charm was the hilarious and touching mime-show used to depict the storyline.

Unfortunately, for the Lego games, the drive for realism has come out on top and Lego Batman 2 introduced full voice performances. Also, the background locations look less and less like Lego models and more like full movie locations.

In Lego Lord of the Rings, the key dialogue is taken completely from the movies' soundtracks, pushing the game closer and closer to the tone and feel of the original. This game looks like it is squarely aimed at fans of the Lord of the Rings movies - perhaps a sensible movie since the Lego games have always been accepted or not on the strength of the fans' connection with the source material.

I'm hoping to be converted, as the Lord of the Rings is among my favourite series of books and the from the screenshots available it looks like the game is very faithful to the film versions.

Among the various console versions, I am particularly looking forward to the 3DS version of this particular Lego title. Lego Lord of the Rings features a return of the wireless multiplayer which was present in early handheld Lego titles but was latterly dropped with great disappointment amongst keen multiplayer fans. It is also my hope that the storage limitations of the 3DS games may lead to a little less dialogue and a little more cute theatrics.

Lego Lord of the Rings is planned for launch on the Nintendo 3DS, Nintendo DS and Playstation Vita, PS3, XBox 360 and Windows PC on the 23rd November 2012. The Nintendo Wii version will follow a week later on the 30th November 2012.


You can support Paul by buying Lego Lord of the Rings