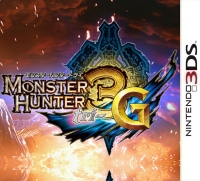 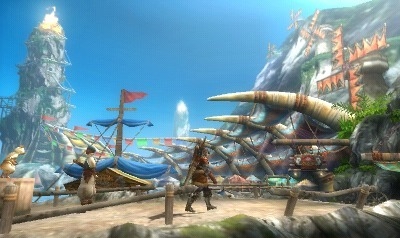 Monster Hunter 3G crams its massive world into the 3DS. While everything survives the transition it's the control mechanics that have the most work to do here.

The dance between platforms continues for Monster Hunter as it ping-pongs its way from PSP to Wii to PS3 and back to 3DS. If you've not come across the game first hand, it's essentially a details loot fuelled role play where there are endless monsters to fight and upgrades to be one. Oh yes, and it's kind of a big deal in Japan where it's presence on the PSP kept the system afloat almost single handedly.

Monster Hunter 3DS game has recently been confirmed and brings the same varied gameplay to Nintendo's new handheld. Setting aside some distracting controller add-on controversies (you can buy a 3DS holster with the game that offers a second Circle pad), this is actually a very exciting prospect on the 3DS.

The game feature underwater battles that were new in Monster Hunter Tri (Wii) and it will also support for popular local wireless play from that version.

The game's first person perspective requires twin stick controls, something that the 3DS is lacking -- and which led to the Circle pad extension peripheral. But without this add-on you can play using the touch screen as a virtual second Circle pad.

It remains to be seen why the developers have not used the 3DS motion controls to provide that second axis of control (in an augmented reality looking around the room to target kind of fashion) as we have seen in Starfox and Ocarina. Maybe they have other more exciting plans for that.

Monster Hunter 3G is planned for release on 3DS in Japan at the end of the year.

You can support Paul by buying Monster Hunter 3G