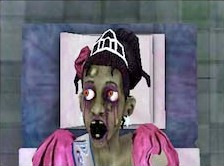 Pet Zombies 3DS will offer a quirky take on the virtual pet, by providing a sinister playmate who'll always come back for more punishment.

Zombies are hardly rarefied subject matter in gaming these days, but it is nice to see a different take on the idea. In Pet Zombies, the player is provided with a captured, tame Zombie all of their own to cherish or punish as they see fit. Essentially a pet sim, the game provides the option to explore a darker side of interaction by choosing to either play catch with the corpse or taunt them with fire. It's just possible the humour won't be to everybody's taste.

However, most of the key elements of a pet sim are present. Zombies must be fed, given attention and dressed and their personalities will develop accordingly. When I spoke to the developers at E3 they were keen to emphasise the StreetPass functionality which allows pet owners to trade accessories for their Zombie. Talk of this feature has gone quiet recently, so it will be interesting to see if this is an oversight or whether the feature has been dropped. It would be a pity if it has, as the social aspect of any Pet sim - even one as offbeat as this - is one of the genre's defining features.

The game comes with a variety of mini-games to provide a wider range of ways to interact with your Zombie, including Zombie Launch, Luck of the Dead and Dumpster Dive. Of course the game also provides a number of locations to reflect the Zombies' individual character, such as deserted shopping malls.

Part game, part post-modern comment on the virtual pet genre (perhaps we're taking this too seriously! - ed), Pet Zombies is a charming and comedic dark side to the popularity of games such as Nintendogs. With a slapstick sense of humour twinned with fairly gruesome 3D visuals this is firmly aimed at the teen gamer.

Pet Zombies is currently awaiting a UK release date for the Nintendo 3DS.


You can support Paul by buying Pet Zombies