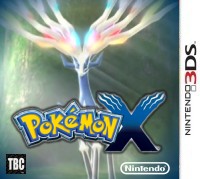 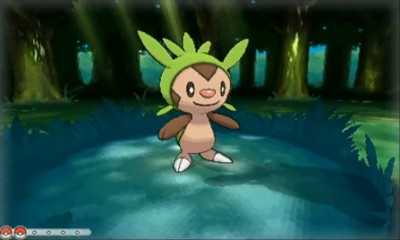 Pokemon X and Pokemon Y is the exciting new Pokemon adventure, the first made in 3D for the 3DS. Details hint at a whole new generation of Pokemon to capture, breed and train, potentially taking the new total to over 800!

At last the news that Pokemon fans have been waiting for! The next paired Pokemon adventure will be released for the 3DS before the end of this year, worldwide! While there are other Pokemon-based games for the 3DS, it is the main Pokemon RPG, with catching, training and battling that is considered the "proper" Pokemon experience and this new game looks very exciting with hints at a new 6th generation of Pokemon and glimpses of the new starter Pokemon and Legendaries.

Pokemon X and Pokemon Y will feature three new starter Pokemon, sticking with the series' tradition of a Grass type, Fire type and Water type. This balance helps to explain to new players the relationship between the different elemental types and has served the series well.

The Grass starter for Pokemon X and Pokemon Y is Chespin, a Mole-like creature with a grassy headpiece. The Fire starter is Fennekin, a Fox-like Pokemon with fiery plumage extending from its ears. Lastly, the Water start is Froakie, a blue Frog-like Pokemon with huge saucer eyes.

We also have glimpses of the new Legendary pair, likely to be in some way related to the letters X and Y after which the games are named. So far, the most obvious link is that the creatures themselves look a bit like the letters X and Y, respectively. Y is a giant red bird-like creature with claws at the end of its wings, while X is a graceful blue Deer-type, reminiscent of the forest spirit from Princess Mononoke.

In terms of gameplay, Pokemon X and Pokemon Y look set to increase the quality of the battle animations even further and the Pokemon themselves have made the leap from the cherished 2D sprites to fully-animated 3D models, seemingly without losing any of their character or charm.

It's purely speculation, but I'm also excited about the vision of the player character standing in front of a mirror - to me this implies that the new game will feature the ability to customise your own hero's look for the first time. Another first for the series is the worldwide release date of Pokemon X and Pokemon Y, seeing the rest of the world getting to join in with the excitement at the same time as it is released in Japan.

It's fantastic to see the series move to the 3DS' improved hardware over the DS and it will be interesting to see how the game benefits from this change. It was always surprising that Pokemon Black and White came out as 2D titles for the DS, given that their original release was just weeks before the 3DS hit shelves. At that time, though, the 3DS was an unknown platform with an unpredictable userbase, where the Pokemon franchise was a hugely popular game series with a dedicated following.

Arguably, Nintendo could have leveraged Pokemon Black and White's popularity as a system seller for the 3DS, but presumably at the point that Black and White were in development, the 3DS specs would have been somewhat mysterious.

Things are now very different for the 3DS than at that time, with a huge userbase and a big library of titles. 2013 will be a great year for the 3DS to grow even further with the help of Pokemon.

Pokemon X and Pokemon Y are currently due for a simultaneous worldwide release in October 2013 for the Nintendo 3DS.


You can support Paul by buying Pokemon X and Pokemon Y