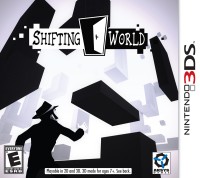 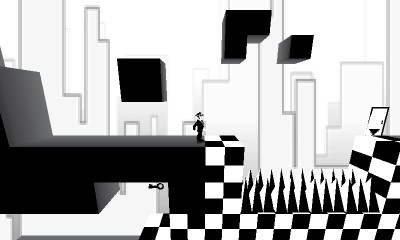 Shifting World is an evolution of a popular series of Indie browser games, fully grown into a console title with an impressive art style and a unique AR feature.

The SHIFT series is almost the definition of Indie success with a casual game which began as a series of free web-browser games. The unique aspect of these games is that the screen can be flipped upside-down and inverted, changing the platforms into space, and vice-versa. This creates a unique platform puzzler with a quirky style and brain-teasing challenges.

The 3DS version builds on the success of both the browser versions and the recent versions for Playstation/PSP and iOS with bigger levels, improved animation and of course the 3DS' incredible 3D display. From early impressions the 3D effect is mostly cosmetic and optional - the action and puzzle-solving relies largely on 2D navigation - but the impression is striking and it brings Shifting World's environments to life, especially with the black and white visual design.

The 3DS version will benefit from an almost Augmented Reality-style feature, in which DataMatrix bar codes can be scanned using the camera and used to generate new levels. Whether this is a one-to-one conversion or whether this simply provides source materials for the game's included level editor, it still means that Shifting World will have a huge amount of possibility.

For the level design feature to work well, of course, Shifting World will need a method to share user-created designs with other 3DS users, hopefully via the internet in a manner similar to LittleBigPlanet 2 (PS3). Without the ability to share easily this feature could be something of a damp squib, unless the use of barcodes allows for the creation of random levels with which to challenge yourself.

The game also features 60 pre-designed levels in total through Adventure Mode, Bonus Mode and Time Attack Mode! Overall it promises to be an excellent addition to the puzzle series and something to look out for on the 3DS.

Shifting World is currently planned for release on the Nintendo 3DS in 2012.


You can support Paul by buying Shifting World