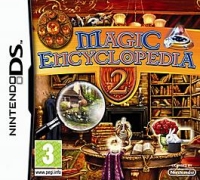 Magic Encyclopedia 2: Moonlight DS is a magical adventure for fans of minigames and seeking out hidden objects.

Magic Encyclopedia 2 for DS is a recently-released port of the 2009 PC game. It casts you as a young and beautiful magic student called Katrina, whose professor has disappeared and is in need of rescuing (presumably she would be a far more ineffective rescuer if ugly?).

Magic Encyclopedia 2 is a globetrotting hidden object game, including such varied locations as a Mayan temple, German castle, Russian cottage, and South-Pacific pearl-diver's hut. The PC version enhanced these picturesque locations with beautiful artwork, which should translate well to the smaller screen.

Within each location pieces of objects are collected to unlock access to minigames. Along the way you will find mysteries to uncover and a powerful amulet to piece together. It's light-hearted portable entertainment for spellbound treasure-hunters.


You can support Paul by buying Magic Encyclopedia 2: Moonlight