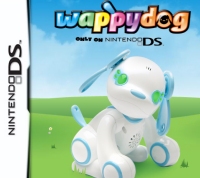 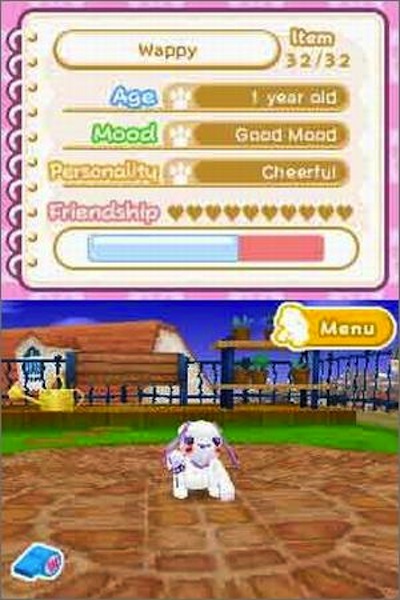 Wappy Dog is Activision's latest Trojan horse to get a plastic toy into your home. A natural evolution of the cyber-pet, Wappy Dog blends Furbies with Nintendogs to offer a pretend pet with a physical form.

Say what you like about Activision, they know how to market their products and Wappy Dog is no exception. Wappy Dog delivers both a Sega designed robotic dog and an Activision game in a single, child-appealing package.

Sega provides the physical element - a motorized white and blue plastic toy that sits about six inches tall. With built in sensors in its head, back and tail it can react to touch -- but most interaction is mediated through the DS. The Activision developed software enables you to use sound to talk to Wappy, who reacts to with actions and more than 350 distinct audio communications that are translated for you thanks to the DS, letting you know if you are keeping your new friend happy. Using the touch screen to play games and interact the new toy, it isn't hard to see why it is capturing the imagination of all the children who play with it.

Wappy Dog's brilliance lies in its use of both the toy and the DS. At home the cute plastic toy plays along and expresses itself with an alluring cuteness. While out and about Wappy can be transferred into the DS. Once in virtual form the owner is able to continue to care for Wappy, whose memory and personality transfer over. Wappy appears on screen and can be played and interacted with using the touch screen as he runs and plays in his simulated world. Here the game will become more familiar to the DS audience, interacting and playing with the electronic representation of using the touch screen in much the same way as Nintendogs.

Both game and toy of Wappy Dog interact wonderfully, and I have to confess it is frankly quite charming. It is not hard to see why Activision are receiving such positive responses from the children they showing it to. As a big box Christmas present, Wappy certainly is a lot cuter than most games and (as I am sure most parents will be happy to hear) at fifty pounds with the dog its price stays in line with most other of the big holiday releases.

Wappy Dog will be released on DS in November.


You can support Paul by buying Wappy Dog