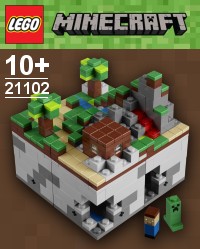 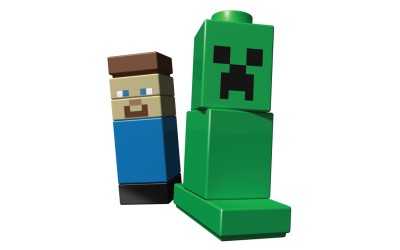 Lego Minecraft takes the obvious next step from the hugely popular open-form world-building game to provide physical kits based on the game's iconic look.

I'll be honest and say that when I first heard people talking about Lego Minecraft, I had assumed that it was an official modification for the game which allows you to make the game environment look like it is built from Lego bricks. It's not that far off anyway, with imaginative user-created structures built from simple bricks.

As it turns out the fuss has been justifiably over the creation of official Lego kit reproductions of Minecraft's distinctive setting. The kits contains a whopping 480 tiny building blocks which can be used to recreate a small part of Minecraft using the simple materials which the game depicts.

It remains to be seen whether these will simply be decorative ornaments for die-hard Minecraft fans, or whether the game's players will find it a helpful option to be able to play with designs using physical kits before attempting to create them in-game.

Either way these are incredibly sweet and thoroughly geek-approved designs which are bound to find a welcome niche among gamers.

Lego Minecraft sets will be available in the Summer of 2012 from Lego stockists.


You can support Paul by buying Minecraft