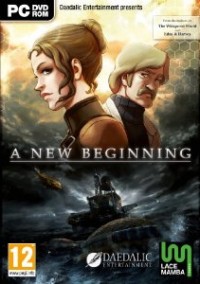 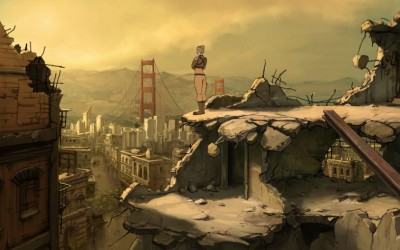 A New Beginning aims to bring a cinematic, tense, globe-trotting eco-thriller to the point-and-click adventure genre.

This is the first of two new adventure games to be released by Daedalic Entertainment this year (the other being Deponia). As well as a deeply involved thriller plot, the action is set against some beautiful art direction. The world of A New Beginning looks like a lavish creation of a distopioa future world; more Blade Runner and I Am Legend, with collapsed skylines, polluted streets and a bleak outlook.

The screens available are immediately reminiscent of Revolution's classic point-and-click drama Beneath a Steel Sky. From what we've already seen of A New Beginning, the locales and characters are enough to draw us in.

As with Deponia, this game features a strong hand-drawn style, but in this adventure the result is a tougher-looking, high-tech web of intrigue and mystery. Hopefully the writing will match the excellent visuals and this is be a story that hooks players in and takes them on an epic grown-up adventure.

A New Beginning is currently due for release on PC in June 2011.


You can support Paul by buying A New Beginning