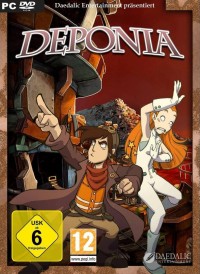 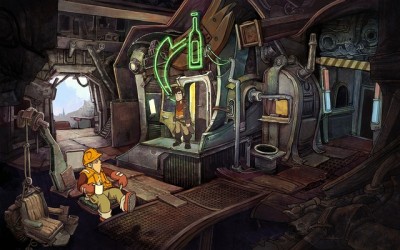 Deponia is a fresh twist to the point-and-click adventure genre and offers traditional hand-drawn animation which feels like a welcome and timely shift.

Deponia is one of two point-and-click adventures (the other being A New Beginning) to be released this year by Daedalic, a German development studio and publisher with a growing reputation for excellence in this genre. They have previously been responsible for publishing the acclaimed Machinarium and handled the German-speaking localisation for Tales of Monkey Island.

Featuring beautifully hand-drawn locations and animations, Deponia tells the story of a trash heap dwelling anti-hero who discovers a sleeping beauty fallen from the rich cities in the sky. He discovers he is a dead ringer for her rich husband and sets about his plan to leave the planet's surface. The story is sure to be a quirky love story and a comedy of errors set in the highly unusual rubbish-strewn world of Deponia.

In an industry filled with cutting-edge CGI, Deponia's screens feel like a wonderfully fresh approach and among fans of the resurgent adventure genre is sure to meet an eager audience.

Deponia is due for release on PC towards the end of 2011.


You can support Paul by buying Deponia