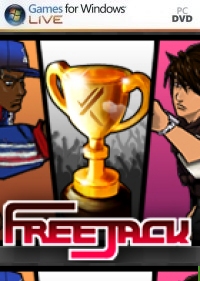 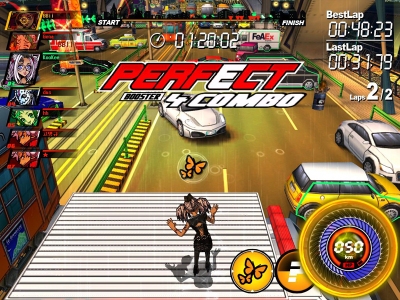 FreeJack is an upcoming parkour game, although the open beta version has been running since October last year. It's a bit like kart-racing on foot, favouring amusement over realism. Races take place in a range of urban courses, with multiple possible paths (ed: Micromaniacs meets Motorstorm?).

The free-running is taught through comprehensive tutorials which can be accessed at any time. They start out with the basics of running and navigating obstacles, and graduate to more involved tricks. I found the game difficult to master, but the controls are straightforward and well presented.

You select one of the residents of New Jack City, each with their own balance of skills -- speed, agility, tough, and technic. You can eventually unlock new characters, as well as buying items to dress up your character and apartment. It has a very street-styled anime vibe, with a mix of cute and tough.

You also represent a particular clan, currently including a range of the city's power-groups. Player-made clans will also be available.

Currently, two primary gameplay modes are available: Mission and Versus. Mission is the solo-player story mode, with repeatable missions and three difficulty levels. Versus includes item race, speed race or flag mode against other players. These can be played individually or as part of a team.

The final release will also include the group-focused Graffiti mode. Players can attack each other to steal each other's paint, in the quest to be the first team to spray their tag.

The full version of FreeJack will be released for PC in May.


You can support Paul by buying FreeJack