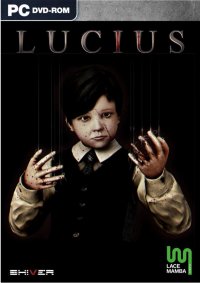 Lucius takes a novel twist on a classic horror story and gives players the opportunity to play out a diabolical plan.

At first glance, Lucius looks like a survival horror heavily inspired by the imagery of classic horror movie The Omen. However, by putting the player in control of the demonic child portrayed, Lucius becomes a game of strategy and deception as the player must arrange a series of "unfortunate accidents" for the residents of a creepy mansion. I'll be very interested to see how the role-reversal from victim to tormentor affects the suspense and feeling of terror naturally associated with this genre.

Aimed squarely at adult gamers, the atmosphere and tension in Lucius is palpable, with incredibly realised environments inside and outside the mansion. With the victims normally engaged in day-to-day activities such as chopping joints of meat and mowing the lawn, it's certain to lead to a bloody pay-off.

The game plays out a little like a classic third-person adventure, with Lucius initially manipulating simple objects to leverage cause-and-effect with fatal results. As the inhabitants die, Lucius gains more and more of his demonic power and can begin to manipulate the minds and behaviour of the surviving residents.


You can support Paul by buying Lucius