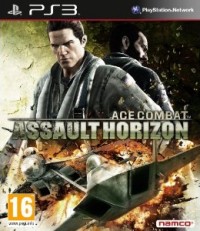 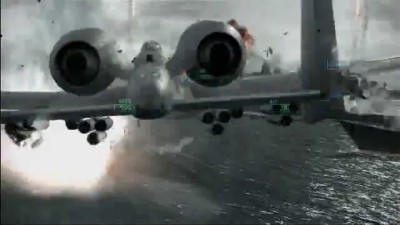 Ace Combat Assault Horizon PS3 brings together a range of important movie and game influences to create an aircraft shooter like no other.

The Ace Combat series has always been more influenced by the likes of Top Gun than any realistic aircraft simulators that reigned on the PC last decade. The creators pursue the goal that what is most exciting about air-to-air combat is the idea of and cat and mouse chases, near-misses and the struggle to gain missile lock.

The more realistic flight simulators have become, the more it is apparent that a dry simulation often boils down to getting within a couple of miles of an opponent and deploying a heavily automated salvo. Not so for Ace Combat Assault Horizon, which keeps the action up close, personal and very frantic.

A clear influence on this latest instalment in the aircraft shooter series has to be Call of Duty. With continuous radio chatter creating the impression of being involved in a much larger theatre of war, a story of global significance and a globe-trotting storyline, Ace Combat is every bit COD's very own air support.

Ace Combat also offers online multiplayer. A co-operative mode allows a group of players to fly together to defend map points against the enemy and the game will also provide a free-for all Deathmatch. Personally it is the prospect of a new kind of co-operative play that has me most excited, with two teams (of up to eight players each) working together to defend or attack a city.

This is also the first Ace Combat game to feature playable helicopters and it looks as though some familiar "gunner position" missions will be appearing to break up the pace, as the player is tasked with supporting ground assaults.

Assault Horizon is shaping up to the be the most exciting Ace Combat title to date, taking many elements from modern shooters and movies and blending them to create an epic cinematic action shooter.

Ace Combat Assault Horizon is currently planned for release on PS3 and XBox 360 on October 14th 2011.


You can support Paul by buying Ace Combat Assault Horizon