Single Out for Co-Op 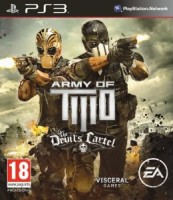 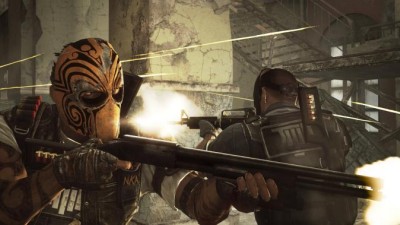 Army of Two: The Devil's Cartel promises to bring even more big-action gaming to local co-operative play as well as online support. It's unlikely to be genre-busting, but it should be an exciting ride.

Army of Two sits alongside Kane & Lynch in my affections and offer very similar experiences. Neither have the delusions of realism brought about by Call of Duty: Modern Warfare 2 or the cinematic brilliance and rounded characters of Uncharted 3: Drake's Deception. What Army of Two: The Devil's Cartel does offer is an deep and rich splitscreen co-op campaign.

Army of Two: The Devil's Cartel will be a big, brash, noisy shooter, featuring a music single release (you read that right) by rappers Charles "Chuy" Rendall (Big Boi) and Anthony "Baker" Barnes (B.o.B.) who have cameos in the game. It's not an unprecedented marketing strategy, thinking back to Mirror's Edge (from the same game studio, incidentally) which spawned the hauntingly beautiful Still Alive by Lisa Miskovsky. The game's creators say that it is all part of creating the action-movie feel in a video game, even down to the tie-in soundtrack. Whether you'll ever hear that record on your local independent music station remains to be seen.

Aside from these cross-culture and cross-media distractions, Army of Two: The Devil's Cartel promises to deliver some extremely satisfying shooting and improved visuals. Like a sister franchise to Need for Speed, but with guns, Army of Two: The Devil's Cartel takes apart the formula of the previous two games, removes the bad designs and improves on the good designs to create a game that should, on paper, be iteratively better than its predecessors.

Army of Two: The Devil's Cartel is currently planned for release on the Xbox 360 and Playstation 3 on the 29th March 2013.


You can support Paul by buying Army Of Two: The Devil's Cartel